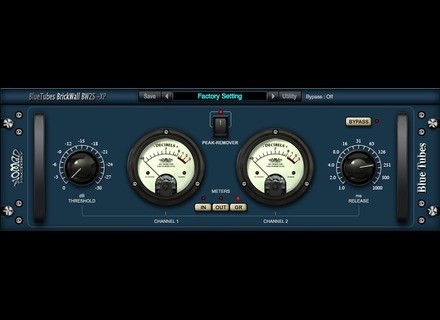 Nomad Factory BT BrickWall 2S-XP Limiter
4
The Nomad Factory Blue Tubes Brick Wall 2S-XP Limiter is a simple limiting plug-in that’s a part of the Blue Tubes Dynamics Pack. It’s the easiest to use in a bundle that has six plug-ins in total including another more in depth limiter. This one is specifically designed for hard limiting, hence the brick wall name. I don’t own the bundle at home so I wasn’t involved in the installation process at all, but the learning the interface couldn’t be easier. It just has parameters for threshold and release, which is really all you need when it comes to brick wall limiting. It also has a switch for peak removal and metering for both stereo channels with options for monitoring input, output, or gain reduction. A manual really should not be necessary.

The studio I work at has the full Blue Tubes Dynamics Pack and the BT BW2S-XP Limiter plug-in running on all of our systems, all of which are Pro Tools HD based. I’ve mostly used it in our main room, which has Pro Tools 8 and a MacPro computer. The computer has 10 GB of RAM and dual 2.66 Ghz Intel Xeon processors. We also have all Apogee converters and monitor with Barefoot MM27’s. Since it’s all HD systems, I’ve never had a problem running this on any of our systems. Most users shouldn’t have issues…

The Nomad Factory Blue Tubes Brick Wall 2S-XP Limiter is perfect for doing simple limiting jobs inside the box. I wouldn’t use it for any sort of real mastering purposes, but occasionally during mixing I’ll have a track that might need some limiting done and this is a quick and easy way to get the job done. To be honest, I haven’t used it all that much since I first used it a bunch of times since I don’t have it at home and I like to do a lot of crossing between my home studio and the professional studio I work at. Having said this, it’s pretty effective as far as limiting goes inside the box. I wouldn’t recommend getting it as an individual plug-in since it’s really worth it to get the full bundle due to the difference in price per plug-in, but the bundle is definitely worthwhile.