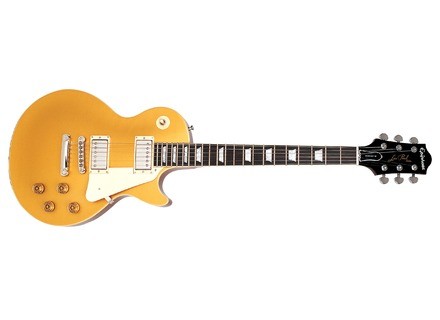 Epiphone Elitist Les Paul 57 Gold Top
4
This is the standard and quintessential Epiphone in the entire lineup. The guitar has a mahogany body with a maple top, it has a mahogany set neck, a rosewood fretboard with 22 frets, a tune-o-matic bridge for tuning stability and tone, two humbuckers, two volumes, two tone knobs and a three way switch.

This guitar wasn't too bad. The fretwork was pretty decent, especially considering the price you're getting. However, the nut was cut incorrectly. It would bind every time you would tune, and you could tell by the "ping" that would occur. Whenever you'd bend, you'd go out of tune. That's a sure sign that the nut is cut incorrectly and needs to be reshaped. The upper fret access is the same as any other Les Paul out there, and the layout is just like every other Les Paul style guitar you'll come across.

The guitar didn't sound too bad. The stock pickups were a bit iffy, but you could get them to work for those looking for that hard rock kinda vibe. I'm mostly a metal player, so I'd personally replace them with something else. The nice thing about this guitar is that it resonated nicely. Considering how much trash can come out of some of the lower lines of guitars, this one was pretty good. The price also made it even sweeter as you don't have to pay a ton to get that Les Paul sound that everyone knows and loves.

Those looking for a decent budget guitar that has that Les Paul sound, this is probably the one you want to look into getting. However, just be sure to play a bunch. I'm sure that it'll need a proper setup once you buy it, so also look into spending some money on having a luthier make it play to its utmost potential.
Did you find this review helpful?yesno
»