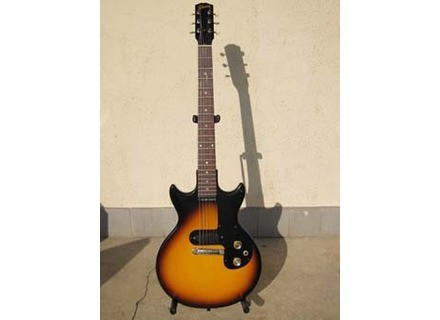 Gibson Melody Maker Double Cut '60s
5
I look for any information about the Gibson Les Paul guitar Melody Maker 1959 recovery picture on this page.
In fact, I made recently acquired but the last owner who had for 2 years did not know the whole story ... This guitar was given to him!
Thank you in advance for your feedback and comments.

Well, I'm not going to be selfish and to share with you my first impressions ....

Of course 100% made in the USA and with the best species available at the time.
The little sister of the Junior not be ashamed before her. Certainly it was not his will but it has its own identity with its single-coil 7/8 "and super fine table.
It is clear that the sound is not that of a P-90 but is not that of a traditional single coil.
This model has been produced for only 2 years old and well appellait Les Paul Melody Maker.
It was equipped with the same non-compensated saddle than its predecessor. The nitro finish was indeed also the famous sunburst.
The neck and fretting for me are comparable to those of a junior pre '60. (50's rounded profile)
A volume knob and a tone knob.

All this allowed Gibson to produce entry-level guitars much more quickly and at lower cost ... quality was even still when waiting for you!
Mahogany table in one piece and key in brazilian rosewood.
This guitar is part of the golden age of the luthiers at Gibson.
It was developed for students and also manufactured version 3/4.

The above model is unusual because it has been manufactured for only 2 years. Few copies survived and often suffered ...

If you find one, do not miss!
Absolutely nothing to do with the reissue that is currently in commerce .... But not the same either budget!

I can not say enough because I am a fan of Junior Melody Maker ...
Ergonomics comparable to a junior but a little lighter.

Perfect for Rock, Blues, .... A sound bite and less powerful than the P-90 but other possibilities in the clear and crystalline sounds.
Watch Out! When we want to release the wild beast does not mind and sends badly. Paste it a good tube amp and you tell me the news!
Personally, I'm plugged pub-rock, punk rock, etc .... and it does really well.
Moreover, already evacuated feels his heart vibrate and this is saying something ...

I also had a '64 Melody Maker and the differences are:
- Microphone which becomes a 5/8 "
- The shape of the table becomes a double-cut

This girl has the temperament and corresponds perfectly to all those who do not take the cabbage with a lot of tricks and want to do the simple but energetic rock! Think of the Dead Boys, Joan Jett, Carl Barat, etc ...
Well, this is not the 7th wonder but it deserves a place in the heart of many rockers.
Did you find this review helpful?yesno
»