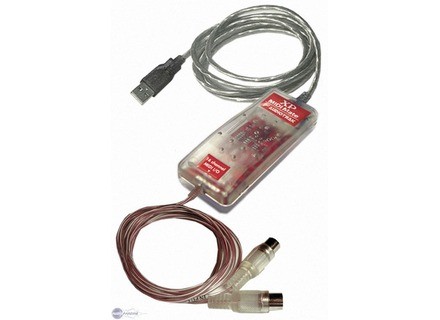 vandyck's review (This content has been automatically translated from French)

AudioTrak XP MIDI Mate
5
This is a simple midi interface (in & out) to plug into the MIDI port. It's basic.
I use to connect my piano (Yamaha P90) to my PC and my drive and VSTi. My PC is assembled, the heart is an Athlon XP 1600 + with 640MB of RAM. The sound card is multimedia (Sound Blaster Live).

I wanted to avoid passing through the taking of my joystick SB simply because it did not work. I tried many things, but there's a time when DIY PC as it becomes more difficult. So I invested in this interface (49 € at Grosbill I not really wanted to know if there was cheaper, all I wanted was to get it back after work).

The rating is not necessarily very significant: the features are basic, but I think it is also difficult to find such lower rate for this type of material. Well, it's a bit expensive for what is probably, but it does its job (see below).

The drivers are stable, and to be installed before connecting the interface (so you do not scare the experience I had seeing the pretty blue screen ...). on the other hand, go look for them on the net.

In my opinion, it may not be updated any time soon, but if there is, I'll keep you posted. The important thing for this kind of material is that it works, period. There's nothing particular to improve.

My sequencer is Magix Studio 2004, but for now I have not tested. For cons, I'm very pleased with chain as a host to test the range Spectrasonics, the Z3TA + (large enough to be said), the Albinoni (some quite remarkable preset) etc.. I'll keep trying my various software, and I will post if there is an incompatibility. But until proven otherwise, everything works perfectly.

Otherwise with respect to a possible saturation of the interface for the moment I have not found. It's my PC that is saturated before in fact: o).

I have since ... last night. Well ok, it's quick to give an opinion, but at the same time there's no 36 features to try on a midi interface o). It works well, that's all that matters.

In particular, it should be noted that it remains small items: one does not realize the photos on the constructor, but the box is tiny, and honestly all I do not seem overly robust. Clearly, one has to do with hardware rather intended to remain quiet at home.

Another important point, the cables are not removable, so to extend, we must choose the correct cable (male / female instead of male / male). The USB cable is about 50 cm, and MIDI cables should be a meter, pretty much.

I have not tried other interface (well, except for the joystick port on my SB, which did not work properly).

I judge the quality / price ratio rather average in that the interface is very basic, and slam € 49 for that ... short, I needed it and it fell within my budget. And it is true to my knowledge there is little interface that is less expensive (it into perspective ...). However, this is expensive.
Finally, I am still very satisfied with this product: it's been months since I waited to connect my PC keyboard, and various elements had prevented me. Now it works properly, and to say a low price. Thus satisfies: o).
Did you find this review helpful?yesno
»

latoska's review (This content has been automatically translated from French)

AudioTrak XP MIDI Mate
5
Athlon XP 2500 + / Abit NF7-M with audio intégré/DD160Go Maxtor/512Mo of PC3200;
I looked for a simple way to connect my Yamaha P90 piano on my PC. I started at a time (with an old PC and a SoundBlaster card) and a common MIDI cable. (Drop)
Since I bought this little marvel (49 € as well Surcouf)
I have Win XP with SP2 pack.
I turned on my PC, I plugged the USB MIDI KIT computer music; waited display Win "your hardware and installed and ready to use," and that's it. It installs itself in XP AND 200 and works wonderfully well, nothing to say.

No crash driver original windows.
I use the software "Musical" and "Piano Passion". Piano Passion which I stopped using, not because of the MIDI KIT but by what this software is really not suitable for learning the piano (see comments on this site)
Cubase No problem.
It is even quite fast for a product like this and this award.

))))
Small (one may look fragile but it's not good for towing a car but not just to connect a PC to a MIDI instrument) Convenient to use and very powerful for a single instrument.
Ah! Yes a repeat without hesitation (but why I did sweat with a sound card and a MIDI cable for all these years?)
Good € 49 but it did protect the nerves priceless!
Did you find this review helpful?yesno
»

v1ss's review (This content has been automatically translated from French)

AudioTrak XP MIDI Mate
5
Hi, is my first post on the site, I begin Music, despite several years of music.

I work with orionpro v5.8, a mc303 and an akai sampler of s20.
J bought a xp interface midimate and my surprise my order seems to be 303 mc by my pc (start / stop / tempo) without problem. my sampler and his slave of my mc.

I have no work that QLQ hours with this config, but I don t see any problem of lag in my mc tempo!
The only drawback is that the TM does not keep the MIDI parameters controlling the sampler during a shift patern.

C is the first midi interface that I use and I think that she should have a good time.

a + good vibes and thank you to my old neighbors deaf.
Did you find this review helpful?yesno
»

Esperluette's review (This content has been automatically translated from French)

AudioTrak XP MIDI Mate
5
For my new Win XP laptop, I needed a compact MIDI interface with cblerie solidarity and having an input and an output. The interface AudioTrack XP MIDI Mate is exactly my choice CRITERIA. I add it just as well be connected with MacOSX.
At home or dplacement, I use the MIDI / USB with a Roland sound module and a piano or keyboard numrique matre appropriate.

No drivers required! Just connect the interface AudioTrack XP MIDI Mate USB port on the computer and ... zou! Go!
I mostly use applications such as Finale and Band in a Box. I tried the interface with other applications (squenceurs, virtual instruments, which have also given DJ'ing all the satisfaction required.

I use it quite intensively Manir for fifteen days.
J'apprcie the ease of installation and prsence LED tmoins who report food and the management of the interface by the computer and the flow prsence MIDI input e as output. C'tait choice for me to choose a MIDI interface with cblerie solidarity (USB MIDI). That said, we must be careful and avoid drawing unwanted fawn on the cables that are relatively thin and may be fragile (?).
Excellent qualitprix - Excellent choice
Did you find this review helpful?yesno
»
Read the 7 user reviews on the AudioTrak XP MIDI Mate »