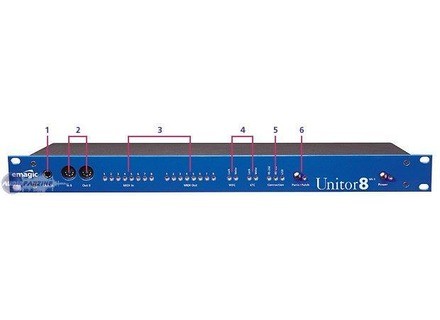 Emagic UNITOR 8
5
The Emagic Unitor 8 is an eight channel MIDI interface. I have used it for linking up a digital keyboard with MIDI ports via USB to control virtual instruments. It has eight MIDI inputs and outputs, as well as a USB port to send it to your computer. It is a really basic MIDI interface, but offers up pretty much every type of connection you'd like to have with an in depth MIDI interface. The Unitor 8 is rack mountable and will only take up a single rack space.

Setting up the Emagic Unitor 8 is pretty simple. Just plug your USB cable into it and into your computer, and then make whatever types of MIDI connections you need, which could be as simple as send your keyboard MIDI out to the Unitors MIDI input, or could be more complicated if you have more MIDI connections to make. Either way, it is a very simple device to use because once you make your connections, you're good to go. It also has LED lights for each of the channels so you can monitor your input and output signals, which is nice so you know that everything is working at all times. The Emagic Unitor 8 can be used with any sort of software...

The Emagic Unitor 8 is pretty much your perfect and simple eight channel MIDI interface. There isn't anything complicated or convoluted about it. I'm not 100% sure if they still make this, but I don't think that they do. However, it would definitely be pretty easy to locate a used one. The price will of course vary for a used one, but since these weren't all that pricey to begin with, I would imagine you could find a deal where you wouldn't have to pay too much for one. While this many MIDI channels isn't necessary for all users, for those dealing with MIDI a lot, it is definitely nice to have so many channels and options for connections. The Emagic Unitor 8 would definitely be my first recommendation for someone looking for a nice MIDI interface.