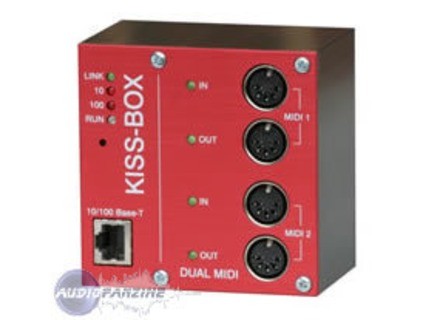 AngusBeef's review (This content has been automatically translated from French)" Fine"

KissBox Dual MIDI
4
The new version 3 has all the features plug & play and I discovered that the zeroconf is in the app from the beginning (my box dating from 2012 already contained), but it does not appear in the manual. Just enter 0.0.0.0 in the address box and start completely plug & play. I have two KISSBOX to drive hardware synths including DSS1 with VSTIZER plugin.
It is also compatible with the iPad, without having to go through USB interfaces that put us over the leg.

The driver is built into the Mac and Windows free. Nothing to say stability, no crash or seen on Win or Mac with Repaer and Live. I find most convenient Windows driver to use than Apple anyway, it is more friendly when an error is detected.
Ever happened to saturate unless reach the limits of the MIDI connectors.

The KISSBOX material is rather expensive, but it's pro in metal case type 2 or 3 mm thick. I use it every day since the end of 2012 their interfaces and nothing to report. The only complaint is that their user manual starts dating, certain functions available on their new software are outlined in the attached documents.

Published on 02/28/13
The new KissBox RTP-MIDI v5.5 firmware now allows CoreMIDI connection to the iPad and iPhone via WiFi.