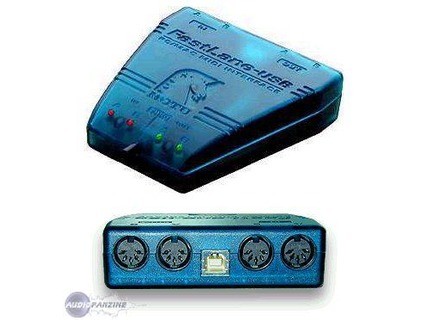 So it fits on any OS (except Linux, I never got it to work under this OS to date), which is not the case of MIDI interfaces of this type more recent that only work on Windows XP and / or Windows Vista ...

Ultra-simple to install, compact and ultra-reliable: no one planted. And cheap too. A button can turn the MIDI OUT MIDI THROUGH: no need therefore to mergers boxes in order to register and listen to the MIDI expendeurs same time.

A single input - MIDI output is more than enough to me, although I plan gives me Motu MIDI Timepiece II: I will use it primarily as a MIDI patchbay and mergeur. The second coming - out of the FastLane, I use it mostly for backups sysex.

I'll also get one second for the computer internet - I will however inform me earlier if by chance it also works on Linux (I hope) because it is likely that I will move my computer from internet Windows 98 to Linux (probably Ubuntu) - I'm sick of the Windows crashes.

Before, I had a Midiman Midisport 2x2 and it was sport to make it work ^ ^ handed this little Motu works first time without worry, and motu mouth shut: impeccable.

Just look triangular'm a bit weird but you get done.

See all 28 photos of MOTU FastLane »