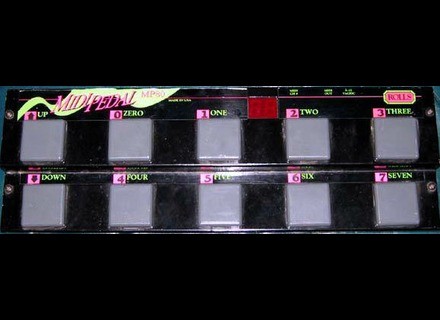 Rolls Midi Pedal MP80
4
I have been using this unit for around one year. What I like about the device is it was very easy to use with my Korg TR. I just plugged it in via the midi cable and was instantly using it to scroll through patches. For that purpose it worked great and I never had any problems with it. Now, where I did run into some problems was when I plugged it into my presonus Firebox to control patch selection parameters and hopefully other parameters as well. For some reason, my computer wasn't recognizing the unit through my Firebox. Whether it was indeed the firebox's fault or my computer's fault, I haven't been able to figure out yet. I must have spent over 3 hours trying to figure out how to get the signal. After checking all the cables and looking for any possible driver issues (seemed really unlikely) I just gave up. I left it plugged in though, and a few days later I decided to just push a few buttons and viola, it worked. Unfortunately I cannot figure out how to get this device to do anything besides scroll and select patches. I would love to have it also toggle on/off certain effects, sort of making it a midi stomp box pedal, but alas, no luck yet. I run it though Mainstage (Logic 8) so i figured it wouldn't be a difficult task but I was wrong. Maybe if I ignore it again, it will decide to work...haha. If I could get that function working, I would give this pedal an 11 out of 10. Its sturdy, very simple (no frills, just 12 buttons, a midi channel selector which can be very confusing without the manual, and midi in/out(thru) connections. Mine doesn't have a usb connection but hopefully they will be releasing one that does, if they already haven't. I pad $75 for mine used and consider it a decent buy. Again, if I can get it to do the toggle on/off thing, I will want to have its children. I would make the same choice again if they added a usb connector.
Did you find this review helpful?yesno
»