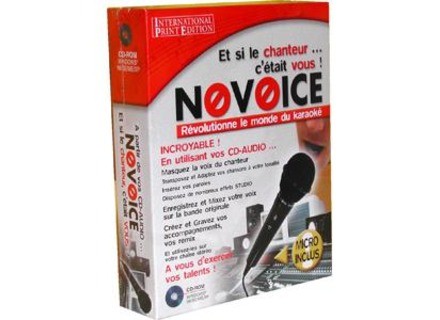 No Voice, Other Music Software from IPE Music [distribution].

IPE Music [distribution] No Voice
4
The installation is very easy and I have not encountered any problem configuration.Il must use formas registration and specific texts
to be taken into compte.Le manual is the "help"
it is quite understandable even for a novice.

I use a home computer HP, Intel Pentium Dual-core CPU E 5300
8 GB RAM 6 GB HDD Asus Xonar D2 sound card (I have customized
but it worked very well with the original configuration). With the change of the sound card, it was necessary to adapt the software configuration that is facilement.J 'uses "NoVoice" for years and it remains stable

I use "NoVoice" since 2008, I'm not a musician, I sing for my amateur hobby and I was looking for a way to get a proper support without going through karaoke videos which are limited to standards and often bad quality
. With "NoVoice" I use backing tracks that I
downloaded legally on the site "karaoke version", I organized in files
on my hard drive. I made a lyric file format "text", and the software allows me to synchronize the music with the lyrics. It works perfectly and until now, I have not found any software to do this
also simplement.Bien course, we should not expect miracles from a
software worth 20 euros, and it is impossible to remove the singer's voice
on a CD without changing the music, but as I used the fact, it gives me satisfaction and I could only find no equivalent, especially for the price. I do not regret this purchase.

rounard75's review (This content has been automatically translated from French)

IPE Music [distribution] No Voice
1
Installing without difficulty, low memory software such as micro processor. No inconsistency, manual summary must grope to understand the functions, as often on this kind of apps.

2.5 configuring GZ, 320 GB, 4GB. Onboard Sound Notebook. More than enough to run the software. The problem is that the promise "removes singer's voice" does not really work. The sound is actually "reduced" but the whole is impracticable to do karaoke home or improvise with an instrument on a CD. So it is useless. After unpacking, installing and running an hour trying to adjust the settings I dropped the case and put away the box. Bad software, apparently extracting a track from a CD is not easy, even with machines more expensive because it requires a separation from the recording / writing which is rarely the case!

Used 1 hour and after ... closet. Absolutely not professional or effective, is not the point. I completely regret this purchase and I am surprised that the major chains offer for sale. Even at 30 euros it's nonsense, useless. I do not know to whom the product because the public's interest to turn to karaoke CDs, DVDs or the internet ...
Did you find this review helpful?yesno
»