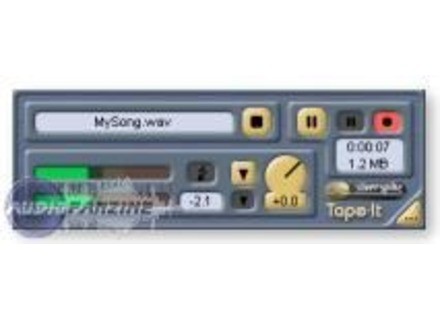 Silverspike TapeIt 1 [Freeware]
4
Silverspike's TapeIt 1 plug-in is a free piece of software that allows you to export any audio into a WAV file quickly and simply. The plug-in is only available for PC users and is also only available as a VST plug-in. They have a newer version of this plug-in, known as TapeIt 2, but I haven't used it so I can't really compare the two. I would probably recommend going with the newer version anyway though, as I'm sure they improved on it. It's a really basic process to download and install the plug-in, as it should only take a matter or minutes. The interface of the plug-in looks like it's own software unto itself, but it's still really simple to use as it just has simple transport parameters, metering, a gain knob, and a place to choose where you want to save the file to. A manual isn't necessary in any capacity for TapeIt 1.

I no longer have a compatible system for the Silverspike TapeIt 1 plug-in, but when I did run it it was in Cubase SX. I ran it on a Hewlett Packard Pavilion dv8000 lap top with a 3.0 Ghz processor and 2 GB of RAM. The plug-in takes up only a small amount of processing power, and being that you'll probably only be running one of them at a time anyway, performance shouldn't be an issue at all with this plug-in.

Silverspike's TapeIt 1 plug-in is definitely a cool idea for easy exporting, but I'm not sure that it's all that necessary. Something like this should be available in most DAW's, but I definitely do see where the convenience comes in as you can easily pull from any audio file and create a new one with it. It won't change the quality of the file in any way as well. So while I'm not sure I'd recommend this to everyone, I would at least encourage you to read up on it a bit more to see if it's something that you might find useful. I can't say that I'm missing it now that I don't run it, but I probably would still have it if I still had a compatible system...