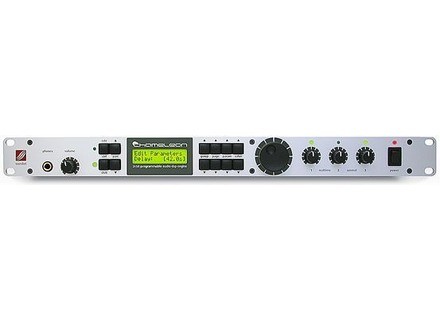 Chameleon, Other Synthesizer from Soundart.

Soundart Chameleon
4
Launched in 2002 and produced until the Chameleon has a name chosen because it illustrates well trs capacity has become more machines Different. It's actually a 1U Local Accommodations that a couple of processors and can be either a sound or gnrateur a processing tool (because of its prsence couple input Stereo e) and torque MIDI In / Out.
Down on the same DSP as the MOTOROLA Access Virus A, Waldorf MicroWave Clavia MicroModular or II that is found also in multiple copies in the Waldorf Q and other Novation Supernova, its main intrt is its versatility.

According to the "skin" (understand the program loaded on the machine) the chameleon can be a VA synth polyphonic (Australis, Entity, Phoenix) a monophonic digital (Monowave II), a Casio CZ rsurgence of (Faze- 1), a sound gnrateur the groovebox Rebirth (Fahrenheit) or an effects processor (South Pole, Infiltrator, amp-o-matic, chromasonic, roomverb M1).

In addition to providing an SDK silent, allowing third parties to build new soundskins (for cons must connatre motorola DSP assembler, forcment not for everyone ...)

Usage is gnralement fairly standard in terms of navigation via a small notches 2 lines of 12 characters, touches and a great encoder.
T have the VSTi MIDI dvelopp soundskins for 2 of which can be a possibility of prcise ide more and makes easier the ACCS. Now, adding an external MIDI Hardware Controller style BCR 2000, or Bitstream 3x is probably wise rvle ra.

For me the skins I use most are:
- Australia is a kind of polyphonic access virus 16 notes and 8 multitimbral parts with its own identity somewhere between the sound viruses access the KS series lead innovation and north clavia.Il VA provides a structure with two classical oscillators with forty waveform with a sub oscillator, a gnrateur noise and a ring modulator, rsons 2 filters, 2 ADSR envelopes and 2 LFO modulation matrix over a fairly complte.
- Fahrenheit on a kind of rebirth proposing the formulation of bassline 2, two BAR and a mixer and effects without inserting the game squenceur.
- The Monowave II, carrying the DSP synthtiseur hybrid (numriques oscillators, analog filter type minimoog) Monowave Paul Maddox 3 oscillators with 256 waveforms, a 24dB filter, 2 LFO with a palette provided trs waveform and ADSR 3 (the latter is available as open source under GPL for lovers express)

The aid of a surface rich in MIDI CONTRL lments of CONTRL makes programming much easier sound ...

For fans of VA that can pursue sound diffrent of Virus and Nord Lead others, there may be something the dig ...

For my part, the difficulty of choosing between the silent sounskins, reloading as a bit long. So I solved the problem with the acquisition of two copies.

VA is a small friendly versatile in concept a bit in the vein of Roland varios or Noah Ex CreamWare, all machines that have had trouble breaking into the market because of the likely difficulty identifying what they taient.
INTERESTED least I got the NOAH Ex nanmoins a sound point of view but more open as long as one has wanted to get into the DIY on a DSP now somewhat obsolete you it is true.

Production was in 2007 shall adopt APRS manufacturing some 500 copies

Announced for 2005, the second generation (the chameleon MkII) was never born and that's a shame because it proposed to address many of the shortcomings of the first model (DSP more Powerful, 4 audio inputs, 6 analog audio outputs plus 1 I / O SPDIF, the possibility of having a high between impdance between one of the prsence d a compact flash slot for soundskin and preset, the transition to the USB PC connection).

The first vritable synthtiseur hardware that has paved the way of open source for industrial MODEL.

silvertouch06's review (This content has been automatically translated from French)

The sound editing is done using a screen a bit small (2x16).
Manuals for various applications are in PDF
The build quality is very good, the rack is shallow for easy transport

The sounds of different applications use analog modeling. The filters are very good as well as audio converters (24 bits)

I use this rack for 1 month, and I love the sounds del'Australis.
I have not tried the other applications. Editing sounds is not super intuitive
but you get it!
The price / quality ratio is excellent and I would definitely do it again the choice.

chupachups's review (This content has been automatically translated from French)

Soundart Chameleon
5
See the website of sound-art in Spain ...

Config super easy to use ... biensur must read a bit before the doc to understand the philosophy of the menus ... Upon completion of the course cest super simple to navigate!

The manuals are clear and easy to understand ... I wish I had a qd same paper in view of the page # of total for each application!

The Ben I must say that I tried the synth Australis .. the sound is very good, original, you will not find elsewhere ... this sound and at the same tps you find sounds like those of Mr Oizo, Pills, Prodigy .. and yes!

By changing filters, effects, etc ..., you will find big bass has to be peter ears (yes I assure you!) And at the same tps of very nice synth, very deep and has both super original! I love it!

we have 8 tracks ... you can choose from LIVE 8 tracks, 8 channel hop noon and plays the synth for you .. cest genial!

Biensur found sounds collected but I do not either have strengths .. most are tablecloths and low in my opinion ...

Monowave I tried and I am peter ears need to be careful to bassssssses! Same for the application simulating a TB303 .. terrible! the sound is deep! I confess I do not feel any diff with a real TB303 but I am not an expert! Ow!

The audio module of Spin reverb is very good .. I immediately ttouve good reverb presets for my drums and vocals ...

The vocoder is terrible .. He impresses me, I launched a preset on a long speech and I got something really super cool with a layer of sound in background .. Finally, the vocoder really good! and I'm not talking about the book with equalizer App! a 24 bands! Quiet!

I also tried the FX designer and can be fun, we do get a ds the box and it appears totally SPACE! great for decks and beautiful intro ...

I think all the sounds produced by this module must fit into a mix and it's not the case of a Virus, Waldorf, and North lead taking a lot of space .. we get the similar quality of sound and original.

So here all the application is not the same but frankly, the synthe Australis, the vocoder, the reverb and FX designer I like serious!

If cétait has ben re-re I am! I take two of these machines!

The only drawback is that only one application can be downloaded at a time ... we can compare this beast stroke the TC PowerCore ... except that the price of soft drinks is FREE! TC is the most powerful but needs another budget!

Oh yes, this module is not for people who have never tasted the synth, or a electribe etc. .. must vcomprendre that all options are done via a menu and have via knobs like a virus, etc. Access! we ask ourselves alone on the sound, we think, and is produced ....

Update: After several months of use, I must not regret my purchase!
more there is a community that grows on this device .. the application so once a month approx. so cest genial!

See all 5 photos of Soundart Chameleon »