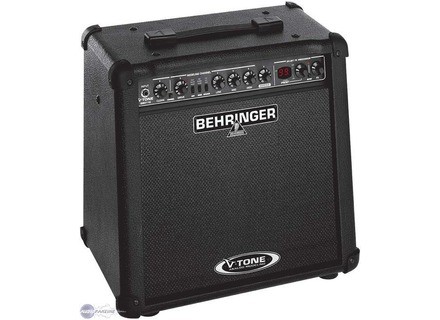 gg493's review (This content has been automatically translated from French)

Behringer V-Tone GMX110
4
E-TONE GMX110 V is the most compact of the GMX guitar combos. This analog modeling amp has 2 channels, 30 watts of power, a speaker 10 "JENSEN ® / BUGERA ™, effects and a tuner. Like its predecessors, it offers available fourth quarter 2003 V-TONE analog modeling, and its effects the tuner, the V-TONE GMX212 is the flagship of the new series of 27 guitar amps sound combinations modeled. Its clean channel and channel modeling provides a full range of sounds ranging from light to extremely saturated through crunch. The GMX110 features a built-in stereo 24-bit delivering effects chorus, flanging, phasing, rotary, auto-wah, echo, delay, compressor and various effect combinations, a matrix FXT allows independent effects settings on each channel and a circuit patented * DYNAMIZER that captures every nuance of the game and generates a compression-type lamps. Controllable via MIDI, the effects are stored in 99 user presets.

The configuration is relatively simple anyone can use it without much problem.
For audio there are only three button to the bass. medium and treble I find it a bit tight but I am currently sufi time a beginner.

It is suitable for every style of music I play rock from pop to hard and so far it gives much.
I play with a Squier Stratocaster HH trans and all makes it very well.
The 99 included effects are not bad at all but they should be changed directly on the amp I do not use much.
The switch comes with is metal and is rather strong.

I use it for just one week.
I think the tuner is built into the amp Assé bad. The effect and the switch are good.
It has a very good value for money because I bought a 150 euro new.
I said he still intended for beginners and with a slightly larger budget I probably took the roland cube 30.
Did you find this review helpful?yesno
»