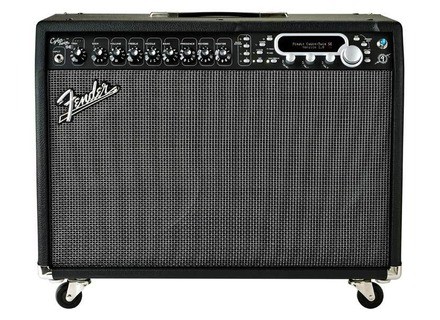 Fender Cyber-Twin SE
3
I mostly play bluegrass and country, but actually grew up on hair metal and just love cranking up the distortion and tearing it up once in a while.

I paid about $500 for this unit used from some guy I found on Dallas Craigslist. The amp had to do all kinds of things, provide every tone I needed for all the different types of music I like to play.

Love the presets, the option to configure tones, the motorized knobs, the power, the sound quality, and the built in tuner. I like the look too. It's sort of classic and modern all at the same time.

Wasn't cheap. Nothing worth anything is though, so I'm not complaining. I heard some folks have problems with some of the electronics, but that was through a guy at a guitar shop who was trying to sell me a lower level Crate combo.

Overall, I'm very pleased. Not sure if I overpaid, but I really wanted this amp and it was only about 5 years old I believe. Still, it sounds great, is in great shape and I'm enjoying the hell out of it.

When I listened to samples of Cyber-Twin at the Fender web site, they sounded very good. It has many different Fender amps sound.

At the CG store in San Jose I inspected the two amps visually. Both were dirty and dusty, they look used or returned, no cover, no caster wheels, no pedals, one amp has broken glass in it. I did not bother to test them. Then I went to GC in San Francisco. They have three Cyber Twins and I tested them all. They all sound horrible. I was very disappointed with Fender!!! BTW, the accessories of the 3 amps were also missing. Why do they sell defective amps? These amps should be re-called, fixed, and sold as refurbished!

Cyber-Twin looks durable and nice looking but the quality is very poor.

Cyber-Twin is not cheap. I know Fender has other models like Cyber-Deluxe and Cyber-Champ. I heard there are problems with them too. I will not buy any of these amps. Meantime, I will continue to use my Fender Deluxe 90 DSP (6 months) and my Vox AD60VTX (1 month). I bought them brand new and I have not encountered any issues with my two amps so far. Only time can tell and I will let you know.

Fender Cyber-Twin SE
5
I PURCHED THIS AMP FROM MUSIC CORNER SALISBURY AFTER TRADING A FENDER TWIN AMP THE CHANGEOVER PRICE WAS $900. I DECIDED TO BUY THE C.T. AFTER BORROWING IT FROM THE STORE FOR A COUPLE OF WEEKS. IT WAS AMAZING!

THE AMP IS EXACTLY AS FENDER DESCRIBE IT, A ZILLION DIFFERENT AMPS IN ONE. IT SOUNDS GREAT, IS USER FREINDLY, AND LINKED UP TO MY BEHRINGER MIDI CONTROLLER MAKES CARTING GEAR AND SETTING UP SIMPLE. I LOVE THE VALVE PREAMPS FOR THE BLUESY TONES AND THE SOLID STATE PREAMPS FOR THE METAL AND COUNTRY. THE AMP IS NOT DIGITAL. THE EFFECTS ARE DIGITAL (AND SUPER) AND SO IS THE WAY THE AMP CONFIGERES ITSELF. THE WAH SOUNDS ARE FABULOUS.


THE CONSTUCTION IS AS YOU WOULD EXPECT FROM AN EXPENSIVE AMP, BULLETPROOF. THE AMP IS LIGHTWEIGHT COMPARED TO MY ALL VALVE RIGS. IT FELL OF THE TOP OF A PLATFORM AND LANDED ON A DRUM KIT (I HAVE SINCE CHANGED TO CORDLESS TRANSMITTER )I ONLY SCRATCHED THE TOLEX. (DRUMMER WAS NOT HAPPY, RIPPED FLOOR TOM HEAD)

THE CYBER TWIN HAS MADE MY LIFE AS A PERFORMER/TEACHER SO MUCH EASIER. THEY ARE STEREO 130 WATTS RMS AND LOUD. I WISH I COULD HAVE HAD ONE IN THE EARLY EIGHTIES, THEN MY BACK WOULDN'T BE SO BAD!! THE CYBER TWIN IS A LEGEND IN MY MIND. THEIR PRICE HAS DROPPED RECENTLY AND I THINK YOU CAN GET THEM FOR JUST UNDER 3 GRAND WITH A BIT OF HAGGLING. THANKS FENDER.

Fender Cyber-Twin SE
2
I bought this amp at Guitar Center in Westminster, Co. in March for around $1200.

Sounded great, tons of tones and effects. The idea of an amp [morphing] its internal circuitry to "become" other amps was intruiging to say the least.

But, problems became evident as one afternoon I sat down, and noticed that the noise gate was doing the opposite of it was supposed to do. Instead of turning the noise down after you stop playing, you could hear the noise actually swelling up in volume. This didn't change regardless of settings or cable/guitar changes.
I thought to myself, lets give it a few more days, cause I really love what this amp does.
The next couple of weeks found me marveling in the tonal versatility of this amp, until one evening I turned on the amps power switch and nothing happened!!
The first thing I thought was it must of somehow come unplugged from my Furman power conditioner. Well' it hadn't, so I turned the switch off, then turned it back on again and it powered up. (Now I'm having serious doubts) After that, it was all down hill. The tone mojo leapt outta' that amp cause' every amp model sounded generic and un-inspiring. To top it off, the display was just a buncha un-intelligble crap. It was time to call Guitar Center.
The salesmen were very gracious and said bring it back and we'll swap it out. That was pretty cool of them, even though it was well past thirty days. So I did some research and found out some of these amps have defective chips. So rather chancing another bad amp, I spent the extra dough and picked up a JCM 2000 TSL 100 half stack and I've gotta say... this amp rules! Tone...tone...tone!!

Don't buy the Fender Cyber-Twin. These probs always seem to happen when you try to cram this much into something. Stick to the basics, find a good clean, crunch, and lead tone and go from there. Happy tone hunting!

This review was originally published on http://www.musicgearreview.com
Did you find this review helpful?yesno
»
Read the 7 user reviews on the Fender Cyber-Twin SE »