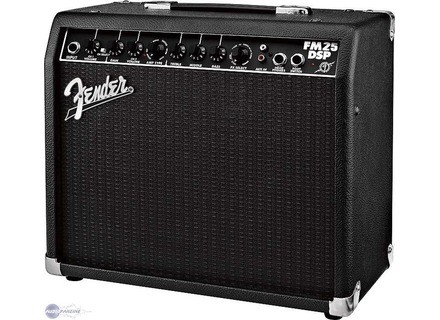 john1968's review (This content has been automatically translated from French)

Fender FM 25DSP
1
So there it is drip pan !!! This is the me ... forgotten right away, good for troubleshooting, are better and cheaper

Try something else if you can ...
Did you find this review helpful?yesno
»

elrond06's review (This content has been automatically translated from French)

Fender FM 25DSP
5
25W transistor amp into 8 ohms.
Two footswitchable channels (optional)
1 HP 10 "
an instrument input, a headphone / stereo line in jack 6.35, an entry (CD/MP3) format cinch
a volume on the clean channel
Then régalge gain and volume on the drive channel with amp simulations, so many styles of distortion, ranging from nothing (jazz) in very full.
Equalizeur 3 band, which actually acts as a volume on each slice (treble, mid, bass). If EQUAL is to 1, no sound, just 10, it saturates its clear ..
several effects available, average quality, but it helps out.
effects are at the foot switchable.
So, in my opinion, it lacks the ability to bypass the effect via a footswitch and an effects loop send / return would have been welcome.
Also a caveat regarding the effects and amp simulation. Indeed, the two potentiometers used to switch to another amp and effect to the other are not notched to mark the different stages ... Therefore it is necessary to let it ring while you run to see where we are, it&#39;s a shame. especially as for amp simulation, there are several modes by amp (4 for the British for example), so by putting the pot with the arrow on British, they had to end up with a typed his heavy, blues, or metal without knowing what it is going to give before putting a shot pick .... M ^ EMA concern for the effects ... So shame

The configuration is very very simple, the manual is very light indeed, no need to expand.
We obtain easily sounds nice in a lot of records. The only difficulty is to find them quickly, even if we took notes for the problem mentioned above. I think I&#39;ll make additional marks on it for the crossing points of an amp to another and from one end to another.

Well, the style of music, it is suitable for almost everything: acoustic, jazz, blues, rock, heavy. Now need to find the sounds that go well. Obviously, there will never be with this material the sound of a real stack with two 4x12 is just a small 25 watt amp handy to carry around or to help out at home if it does not connect all the paraphernalia or wake the whole neighborhood.
I had a lot of amps, the first &#39;baby amp "that I took. Following the advice here I removed (perhaps wrongly) the marshall (confirmed by my dealer, its very way he says). in store so I tried this amp and a Vox DA15 .... the verdict was very very hard for the VOX. Well, it&#39;s not the same power, but good, the vox is just powerful enough to be properly heard in a room .. Well, the purpose of these amps is not to do concerts eh .. but still, the VOX 15W is really not enough. The Fender might even possibly help by repeating I think, finally, if the batter puts a little of his own.
The acoustic simulation is very nice in the process.
Be careful with my gibson, the clean channel starts to saturate if the knob of equalization are all within 5 ... (Yes, they act as gains on certain frequencies, as mentioned above), so attention to setting, but it was a very nice crystal-clear sound with the fender in the clear otherwise.
In short a great little amp for fun at home, work without connecting an amp too powerful, save the lights of his other config, etc ... Not really sound that I hate, it&#39;s a bit of everything and not too bad.
The rating takes into account the category in which this amp is changing ..

I bought it today, so I use it recently. However, we quickly made the rounds, it is very easy to use.
What I like: it is small, lightweight, has good sound anyway, and that&#39;s why I bought it.
What I like least is that the knobs are not notched on the modeling is ch ....
So I tried a VOX DA15 in the same category: Winner by KO: The Fender (50 euros more anyway)
Otherwise, I had plenty of other amps but not in the same style, so of course incomparable.
The value for money is extra, I got it to 220 euros in store, it is less than 200 euros nine on the net. For this price it&#39;s great, but beware, it&#39;s not for group play with a drummer eh! or so I think really unwinding, because it sends strong, but as it grows a little, the HP 10 "and 10 kg of the machine are a little weak people ...
I would do this choice with his eyes closed. Little amp really well designed. For the price the sound is there. It will allow me to go play with some friends without having to carry a rack with a 35kg 2x12 of the same weight .. Here, the guitar in one hand, the amp in the other, and I can still park at 2 km walk from where I have to go, I would suffer it. Possibility also connect me to try something on the fly at home, without having to wait for the whole mess tube is hot, and cool before cutting.
Did you find this review helpful?yesno
»

victhebig's review (This content has been automatically translated from French)

on the other hand, if you have any plans cafrpt is nickel!

Configuration?
there is satisfaction !!!!!!!!

There are at least six clean guitar sounds, from acoustic simulation, to jazz ...
The distortion, amp simulation so ... GOOD!

An overall opinion would be hard: this little amp has a 25 trs's strong, and this power makes it usable in RPET.

Ct clean sound: the sound is so foil fender.
ct drive: the digital drives plutt therefore a lack of EHJV pti ... shame!
but also a plus for delay / flanger / reverb: no need to loop effects!

This as I said Whereas a good choice, just a. Better than many others, but qques Exceeds by one (especially vox)

John5Petrucci's review (This content has been automatically translated from French)

Fender FM 25DSP
2
25W transistor amp, power low enough so the clean channel can get pretty high but the second channel does not have much dlivre same background ... If it is not in groups as well, you can have fun with or without the risk of the chopper accouphnes ...
Question connectors, the bare minimum with a small bonus when same: an entry for the guitar, between the footswitch ... non provides a headphone jack (for jack 6.5, prvoir adapter so) and the nice little bonus, a connector for connecting an MP3 player, cd, dvd ... and loccurence Zoom 9.2 tt I as a command, the lights will not zoom by LH tansistors of Fender ... on the other hand no effects loop, I see large black dot ...
Questions effects, much to forget, they are all the more unworkable than the other, has a pots over let's say ...

Nothing could be simpler, plug, turn the pots just for the sound (they do not have a big influence so we can put the four nimporte just how did not change much

) is chosen modlisation his amp and presto, it's part ...
Good? Yes and no, the extreme ease makes it hard to find a sound that is personal we ...
As said prcedemment, which is a shame is that the pots are not "notched" so that we know there is o ...

Whether my style of music? Yes, it is all types although the sound is a bit ropey.
I play an Ibanez GRG270 upgrade with micro DiMarzio and within days, a multi purpose Zoom G9.2 tt I'll be told to talk about his impact on my sound once I have enough apprcier of exprience in the fair value.
Question's, Channel 1 (clean) is horrible and unusable, it's wrong, it's not slamming it dull, Morros ... forget.
Channel 2, the modlsations, some are a mixed lot, some ...
The acoustic simulation is not badly made, with good enough strings rcente we arrive quite easily something that comes close, good point.
The simulation Jazz ... Actually I am not knowledgeable at all, personally I find it terrible but I will go too ...
Then the channel Tweed, I know the amp simultaneously but I think it's by far the most enjoyable sound, I use it as a clean channel (the first "mode") and it gives me much more satisfaction than channel 1.
Comes the channel Blackface ... Spcial nothing to say, I find it bad, but not exeptional!
British Channel, friendly, not too bad a crunch when rgl properly and adapting with the last channel can give a lead crmeux and friendly (well everything is hard, must have a friend or family of ct is to turn the pots playing ^ ^)
Canal Hotrod, well, I do not like, I just try not too but I rgl Russia finds a sound that suits me (at the same time it is the opposite gots my main so good ...) I find the sound too twangy and not too enjoyable ...
The last channel, modlisation "Metal" that I use 80% though it satisfies me ... gure The gain was 10, we still want to grow, but not possible ... and do not think putting a small distortion to boost a little, I have a Boss DS-2 and just by pushing a few millimtres Gain pots, large breaths coming in and I win not win ...
In addition it has no momentum, the PM is bland and the scope of s'vanouissent aussitt mdiator pass ... not great for a channel east mtal ...

I use it for half a score of months, I wanted to wait to have enough experience to talk about ...
The particular feature I like most is that we can address all styles due to the diversity of sounds around (at the same time it's the least we can ask what amp type ...) and I like least and fool quality of plupars sounds ...
I could try any other amp before because the only store plutt proximity is small and not too much stuff in stock, and some stuff on the spot was too expensive for me to test. .. So I have to trust the vendor ...
The report quality is good enough ... say that by 200 I expected a Mesa Boogie Roadking not II but I would hope a little better, for less you can do better I think (eg Roland Cube 15)
With the exprience I will not repeat that choice, I had a budget of about 500 to buy a new guitar and a new amp, and if c'tait again, I took a Roland Cube 15 and an Ibanez RG best quality.
Did you find this review helpful?yesno
»
Read the 6 user reviews on the Fender FM 25DSP »