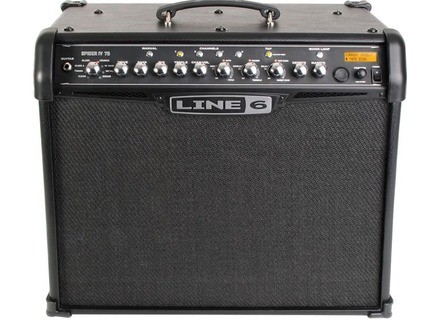 Line 6 Spider IV 75
4
I have been using the Line 6 Spider IV 75 for over a year and it continues to grow on me each time that I use it. It has 75 watts with over 500 presets and most of them are special presets that are done by certain individuals that modeled classic sounds from classic songs over the years. It has a lot of effects, delays, mods, echoes, noise gate, boost and you can edit all the parameters of all of those effects. You will have total control over how you want the sound to come out. You can also hook it up via USB so you can get updates right to your amplifier. The Spider IV by Line 6 has revolutionized the amplifier experience by adding this feature in earlier models.

There are a whole group of rockstars that have hand crafted and dialed up the sounds on this amplifier. As soon as I heard some of the names that help create the presets like Jonny Marr and Slipknot I knew that this one was the one for me. It is very easy to get a solid sound with the Spider IV, and it is also very portable if you need to move it around from place to place. It is well built and can take some bangs and scraps without showing a visible damage.

You download the software from Line 6’s website, its more of an edit software where you can create presets and download some other ones from different Spider users. Everything with this amp is easy to use and all of the knobs are right on the front of the unit.

If you are in need of a good amp that you know will sound good, then this is the one. You will have full control over your effects with the ability to edit them up to 7 different parameters. Go online and download more presets, trade presets, or give them away. You can really do anything you want to do on the Spider IV. Crazy Train, Purple Haze, and Teen Spirit are some of my favorite presets on this amp. This is a must have for any guitarist.

Line 6 Spider IV 75
4
I needed a 'go to' amp that I could record demos with or take out to gigs. Reliability and price where high on my priorities, but I also needed something that sounded decent.

I read many good reviews on the older Spiders so when the new Spider IV came out I have to give it a shot. I got it for $300 with the smaller foot controller included. What's great about Line 6 is the controllers are usually interchangeable, so if you have a Line 6 chances are you can use the same pedal board.

Plenty of tones available to you, my goal which was completed was to get 4 sounds; a nice clean, a light breakup, a crunch and a heavy distortion either for leads or metal types sounds. With the manual and some boring online reading I was able to built presets pretty easily.

16 amp simulators and 20 effects you should be able to get something decent. I'm a big fan of big ol, heavy tube amps. Although the Line 6 isn't a replacement for them, it gets you in the same room without the hassle.

The CD/MP3 1/8' input jack is what makes this amp a fantastic practice tool.

The reliability knock on wood has been good for me, but I had a friend who's amp cut in and out and also I have a Line 6 POD with a similar problem, but that is the price you pay for digital.

The amp is nice and compact. The handle is sturdy. I'll guess the weight is 30 pounds?

The amp pumps 75 watts into one 12 inch Celestion speaker. This is plenty of juice for most moderate gigs.

Not a replacement for the Fender Twins and Marshalls in this world, but if budget, versatility and portability are on your mind, give this amp a whirl.

Line 6 Spider IV 75
4
The Line 6 Spider IV 75 is a great, and powerful amp. It went well with my fender Stratocaster. The fx are amazing great variety of distortion. It also has amazing wah gain chorus and phaser. Ther delay is great and it so easy to control the exact amount of feed back. It is great for practicing because if your mom yells at you to turn it down you can turn the amp to 50% power. But then when you need to perform at a gig you can turn it up and the whole room is filled with the amazing sounds of this amp.it is the quality of a $600 amp but for a much lower price. My people that have used the Line 6 Spider have complained about the clean sound and the reverb, but the reverb is really great and the clean sound could be better but is pretty good.

If your like me and you love the sound of the distortion used by such bands as As I Lay Dying, Killswitch Engage (already made presets) and August Burns Red and For Today (easy to make sound alikes) then this amp for you. You wont find many other amps that provide this quality for a price like this one.

If you love fantastic clean tones that would put anyone to sleep, then you might wanna look some more. There are some clean tone aspects that are nice though like Twang wich has a nice thick sound with a little delay that is nice when playing Tool, Chevelle, Breaking Benjamin and other heavy alternative band's clean tones. Also the As I Lay Dying clean tone is nice for playing at church.

Overall a great amp and at a very reasonable price that you can afford. I suggest you go to your local store to check this one out. You wont be disappointed.

Line 6 Spider IV 75
2
I have several friends who aren't really guitar players who own this amp. This is a introduction to electric guitar amplifying. This is not the type of amp someone who has been playing for 12 years is going to buy. If you are learning and walking into a Guitar Center or Sam Ash you will see these amps sitting there. They are pretty much junk. There isn't too much of value on them but they aren't really aimed at the high end gigging musician either.

They have a few different distortion setting and effects that give you somewhat of an opportunity to have different modeling sounds. Nothing to which sound natural or real in any way. You aren't going to take this amp and gig with it or even show your friends. You are going to tuck it away and practice with it until you can afford a real tube amp.

This thing is going to sound like a digital amp and there is no way around it. You can have all the artists you want help give way to a sound that sounds artificial. I really dislike these type of amps and modeler combos. They really sound like trash cans hitting a barn wall.

It really doesn't matter what you use as far as guitars go because it all sounds the same through this amp....blah. Try it with a Les Paul or something with a humbucker in it since a lot of the preset are geared towards that with the artist offerings.

Keep it simple and easy with a guitar cable and a tube amp. That is simple and the honest way to get started playing the electric guitar. Pass on this with flying colors. This is a terrible sounding amp to say the least.

At new these things sell around for $299. Not an expensive piece, but still too much for what this amp.

This thing is not good. It is loud and terrible. It sounds horrible and you will spend more time dinking around with sounds and effects rather than actually playing the guitar. I wouldn't recommending this amp to anyone.

Did you find this review helpful?yesno
»
Read the 12 user reviews on the Line 6 Spider IV 75 »