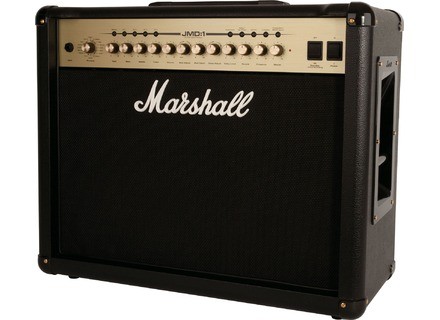 16-in-1 Marshall Every guitar player knows Marshall and its cult amp series that has been manufactured for over 40 years now. Sometimes praised, sometimes criticized – everyone has certainly heard about the Marshall Plexi, JMP and JCM800, some of which even became reference products. After the launch of a new all-tube series (JVM), a solid-state series (MGFX) and a tube/solid-state hybrid series (Valvestate), Marshall only lacked a tube/digital hybrid product range. Thanks to its cooperation with Softube (well-known for its software amp simulations), Marshall has now launched the new JMD:1 series entering the semi-digital area. Today, we'll take a deeper look inside the JMD501... Read more…

Marshall JMD501
4
The Marshal JMD 501 is a solid state guitar combo modeling amp. It has a 1/4 inch input and has a ton of parameters for effects and tone control of all types. It has a digital screen that you can save sounds in addition to the vast array of parameters. There is a nice amount of control over your tone, with a lot of effects, making the Line 6 Flextone 3 a versatile guitar amp.

The configuration of the Marshal JMD 501 is pretty easy to follow and it won't take too long to understand what everything does. It does take a little bit of time to figure out how to navigate through the screen, but it is done smartly enough that it won't take too long. It is pretty easy to get a good sound from this amp, but it really depends on what type of sound you are going for, as some of the effects are better than other on this amp. The manual for the Marshal JMD 501 is pretty complete and easy to understand, and it is a good idea to have it around while learning this amp.

Marshal JMD 501 is great for rock music, but will work in almost any setting. The effects range from delays and reverbs to modulation effects, but none of the effects are that impressive to me. This being said, they are usable and it is nice to have so many different types of effects within one amp. It has a great clean tone, but the distortion comes off a bit tinny sounding and I would recommend using a pedal for your overdrive when using this amp.

I've been using Marshal JMD 501 for about a year and I have found it to be a good guitar amp. It isn't the best by any stretch, but it is a reasonably priced option for the intermediate player looking for an amp with effects. It is versatile and is perfect for the player looking to figure out what effects they like to use best. Overall, the Marshal JMD 501 is a nice amplifier, but I wouldn't recommend it for professionals in any situation.

Marshall JMD501
4
This is the 50 watt combo version of the 102 amp. You get the same great features and tone. However, the tone will be a bit more spongy due to the cut of half the wattage. You will get a bit less headroom in the overall tone.

This amp is an interesting take on the new wave of amplifiers. They take the digital side of modeling and combine that with the power tube section of your already familiar Marshall tone. It was a big surprise at how close to the amp models that this amp comes close too.

So basically it is a digital preamp and a tube driven power section. The preamps cover just about ever Marshall amp that they have done and it does a surprisingly good job. I have never been a fan of amp modeling as most of my experience has been with Line 6 and those things sound terrible. So when I first heard this amp, my ears immediately perked up.

The amp covers a lot of Marshall ground and the price is nice as well. If you can't find a decent tone out of 16 amp models then this isn't the amp for you. So you should be able to quickly get the sound you are looking for in about 2 minutes or less.

At new these amp come in at around $1150, which isn't a bad price for the features and tone that you get. There are plenty of hot-rodded Marshall tones available in this amp and it doesn't take too long to find them either.

I would recommend this amp to anyone who loves the Marshall tone and can't decide which series they would like to have. The tone come as close as you can get for a modeler and sounds fairly organic.

Marshall JMD501
2
Hybrid digital modeling preamp and power amp tube (12AX7 EL34 +). I tried the combo version 50W.
The connection appears to be complete with an effects loop in addition to the integrated effects section.
I put a 7 because it&#39;s good, it could have been better -- with two volumes as an example -- and motorized knobs as the Spin Doctor T-Rex.

The setup is fairly simple. I have not read the manual, but the basic settings are fairly intuitive. Actually, for each preset, you end up with a basic amplifier and its settings,&nbsp; gain, tone-stack volume. Then-delay modulation effects, reverb, and the presence and master.
In terms of getting good sound easy, I still say no, because it is not obvious to find the right preset, the best clean / crunch that I found was in the overdrive section ....
Then, the rotary knob that lets you choose the type of preamp is not super readable, we do not know exactly where you are, battery-haired, above or below ... So in the end it by ear ...
Therefore not easy to find the type of preamp, then I do not find the grain and responsiveness that I was looking for. I tried this amp in order to replace a JVM410 a bit noisy, which I am obliged to insert a noise gate and effects in the loop, the JMD seemed to be the solution all embedded ... Verdict: we are very far from the goal ...

I put a 4 (inadequate) because here in dire need of clarity, we do not know what preamp is used on any patch, and we do not see the settings directly. Difficult to get consistent sound. The preamps are not necessarily listed in order of the gain level for example ... short, not super intuitive, in the end we do not know where we are and where we go. In this case it is difficult to find what we seek, the more difficult for discerning guitarists wanting a good sound out of this amp, it will be virtually impossible given what it can offer ...

Then the sounds: the biggest weakness and it is indeed a pity on an amp in this price range. as mentioned I wanted to write another attempt on numerical modeling after reading some positive reviews in the jungle of opinions (which are mostly negative on this amp). So I wanted to make my idea ... Verdict:
- Clean sounds are quite beautiful, but lack of dynamics, it says I&#39;m not too pushed the volume, therefore possible that HP has not had the desired response. The various configurations of pickups on my guitar (double, single, round, bridge, center, mix, etc.) did not yield large differences in rendering, it&#39;s pretty deplorable.
- Sounds crunch have no interest, severe lack of gain.
- The overdrive is most interesting, there is a little full range of sounds, from clean to crunch pushed, but still this lack of respect and not dynamic microphones.
- The leads ...
Well, I&#39;m not at all impressed by this amp. On the other hand one could say that I compare to a JVM ... but I also have a MG50FX (new in 2009 then), and honestly, there is no picture from a MG50FX JMD501 and what that costs 3x the price, MG50FX is well ahead in terms of grain, reactivity game and the guitar volume and the various configurations of microphones.
I liked almost nothing about this amp, only the FX section is doing compared to others, they are digital effects, here is doing his job properly neither more nor less.
A choice, better take a MG50FX MG100FX or it will be less fragile and far better in sound reproduction.
I put a 3 (poor): my opinion unless severe hearing loss or stroke of luck monumental, impossible to make anything of great (except maybe clean)

The test lasted about 30 minutes or 1 hour is not much, but I am not extended, I could not find a grain that suits me and can serve as a good basis to work. I am not too bent on equating the sudden, I look first and foremost an amp that responds correctly for the attack and guitar volume, there is nothing all that.
The only positive is that it incorporates a section of the effects sufficient to live.
The downside: almost no sound exploitable in an amp supposed to emulate the 16 best productions of Marshall over the past 40 years ...

Finally, an amp that costs the price of an amp lamps very good but that does nothing more than low-end modeling ...

I have owned a lot of amps, I do not remember having been as bad. Note that I play on Marshall JVM and MG at the time of writing this review and I am absolutely delighted with these two amps. The digital is progressing but is still far off.
Just listen to the demo site marshall, we say that this good chris george has not made a big effort on the settings, the sound is a bit tinny and flat ... ben in fact the contrary, it is wonderfully sound this amp, this guy is a god ... wow ... Finally, when comparing it with other amps out of the brand you get better at locating the JMD ...

Now everyone does as he pleases, and as he sees fit. It&#39;s my feeling, I tried to translate it, some will find to their liking and in fact: it is essential.

Listen to the 25 audio files about Marshall JMD501 »

Marshall JMD501 manuals and other files