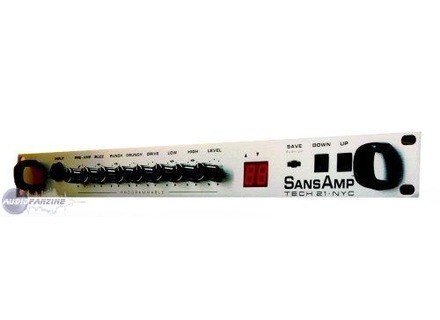 This is a one unit guitarbass pre-amp with 49factor presets and 49 user presets. The psa is described as a 'tube emulator' but it is of such qaulity that I see it as an amp in it's own write. Unlike the popular 'Amp Emulators' (Pod etc) this unit is not made up of an amp select, cab select, drive and eq controls. It is made up of all parameter controls which are tweaked to make it sound like you want it (like another well known amp for instance) there for it is extreamly versatile compared to other emulators out there.

Err i like everything thats there, but to add bad points id have to say:

The PSA is built like a really well built err...thing. Shallow 1U rackmount

I have no bad opinions of what IS there just the lacking features i mentioned. If this was stolen, id have to replace it ASAP.

Tech 21 SansAmp PSA-1
5
Purchased from the Rock -n- Rhythm department of The Woodwind and the Brasswind (http://www.wwandbw.com) for approximately $550 in summer 1997. I wanted to divorce my sound from dependency upon tubes, and the PSA-1 had the best sound among the available non-tube pre-amps.

Stores 98 MIDI-switchable presets. Very easy to edit & store. Exceptionally good tone. The device is a pre-amp which emulates various tube amplifiers (e.g., Fender, Marshall, Mesa), both in their pre-amp and power amp characteristics. Even tube enthusiasts are stunned to discover that the PSA-1 has no tubes.

The effects loop is either 100% in or 50% in. I would prefer a continuously variable mix control. In practice, however, I can control the overall effects mix from one of my other processors.

I have never been disappointed with this purchase. I still think it is the best sounding pre-amp I've encountered.

Tech 21 SansAmp PSA-1
3
This is a pretty nifty preamp rack that I got from a friend, pure solidstate but 100% analog circuitry. It is not discontinued and been replaced with the PSA 1.1, the biggest differences being an on/off power switch, 128 presets as opposed to 99, a master volume control, an XLR ground lift switch, phantom power, midi output and a dedicated headphone out.

I should note that this preamp is designed for ONE instrument at a time. Although it has 2 inputs, the 2nd input is not meant for simultaneous instruments. The manual says input 2 is actually disconnected if plugged into input 1 on the front panel. Input 2 is cleaner, and has the least amount of distortion, meant mainly for rack and patch-bay applications. So if you were plugging this in, in a straightforward fashion without extra signal processors just to a power amp or head/combo, input 1 is what you'd want to use.

There are 99 total presets. 49 of which are already made by tech 21 and cannot be erased. The other 49 are for you to store/save/tweak etc. There are many ways one can use this preamp; traditionally with a head/stack or combo, or direct through to a PA or mixer or right to your computer's preamp. The preamp has a built in speaker emulation for direct recording, which gets rid of some of that fizziness found in other preamps.

There are no special effects, just clean and dirty. With the amount of settings available, you can tweak your distortion sounds to go anywhere from breaking up to high gain uber metal. I'm not a huge rack guy so i like the layout, it's one of the simpler preamps I've dealt with. Guitars AND Bass can go into this unit.

Tech 21 has basically nicknamed the basic EQ controls to more confusing ones, I don't know why. But if you read the manual or play around with it a little bit you can get to understand it a bit more. Buzz controls the bass. Punch is like a mid control. Crunch is like the treble. Drive controls the amount of gain. The Low and High are like to extra boost/cut options. And Level controls the overall level of the outputs on the rear panel.
The footswitch option is good too, you can connect something like a momentary single button footswitch to step through the presets. Or you can hook up a midi moose or any other midi controller to select presets.

Generally it's very usable. Though not the all-in-one sort of package. FX loop, midi, Footswitch, -10db pad. 50/50 Mix knob is cool too. But then, I mean 99 overall presets of just clean and distortion seems excessive. And no on/off switch? Everything has an on/off switch!

Let me first say, that I am NOT a tube snob. Though I DO prefer tube amps majority of the time. I also like good sounding solidstate gear if they sound great. So most of my judgements are NOT comparisons to tube amps. They are simply a matter of what sounds good to me or doesn't.
For Direct Recording:
The manual has a few suggested settings that you can try, most of which I found were way too fizzy and trebly for a standard tuned 6 string guitar. I've tweaked with the controls quite a lot and experimented using impulses, other preamps, EQs in the loops etc etc. All of which can sound pretty decent if the end result is mixed in with drums and bass etc. The thing about recording is that it's like looking at something with a microscope, everything is picked up and heard. And this unit is fizzy and fuzzy in general. It DOES require a lot of tweaking and external equipment to get it to sound GREAT in a mix. By itself, it sounds average.

The cleans are quite good in general they can get quite chimey.

As for distortion sounds for most genres that require medium gain, or low gain or even high gain but standard tuned metal, it's too buzzy.

HOWEVER, with the type of music out there now a lot of heavy metal/death metal etc bands are using super detuned guitars and 8 string guitars. With that type of genre and those super low frequencies, this preamp SLAYS!!!! It's like instant Meshuggah!!! And since it sounds awesome with downtuned guitars, it sounds great for bass also!! Cleans and dirt! The distortion in general is a stiff sounding distortion with no power-tube sag. Though it's all analog it's still fizzy even with the speaker emulated out.

This is where it shines. It sounds great in a live mix with a full band, all the fizz is gone and the tweakability is nice to have. Depending on what poweramp you're using, it'll sound slightly different. The basic sound is great. Does it sound like a tube amp? There's two ways to think, first: I'd say, with a band, and a crowd of people, playing live on stage. YES definitely. Second: with just the guitar rig, and beside it, another full tube rig. No. This is one of those things most guitar players go through with the mindset. You only really notice the difference if you have something to compare it to. But if you use it in it's context, you'll be takin off!!

Overall, after owning this for nearly a year and using it nearly everyday I've found the pros and cons for the unit which I will sum up here.

PROS:
- Great cleans for guitar or bass
- AWESOME METAL distortion for downtuned/8string guitars or bass live OR Direct -- better with Impulses
- Reliable construction.
CONS:
- Horrible distortion sounds for any guitar in any genre other than downtuned metal. Way too fizzy.
- Wish it had at least an on/off switch like the upgraded version. (Sort of seems like they just forgot when they released the first version)
Overall, it's a good unit for certain things and not so great for a lot of other things. Live use is always simpler and therefore sounds great. Also, most of the reviews are dated! Majority of them aren't comparing things to today's new solidstate stuff that sounds better for cheaper. So I can see why a lot of other revews are high. But for recording, and for this day and age with so much new technology and improved solidstate gear. This unit is average at best BY ITSELF. Since it requires, at least for me, a LOT of external equipment to start sounding decent. The old manual still has it's old price, of back when this model was first for sale, $795. And nowadays a used one is at most $300. This unit does not stand the test of time. It's only ok for what it is. Therefore, I'm rating this unit a 5.

Did you find this review helpful?yesno
»
Read the 16 user reviews on the Tech 21 SansAmp PSA-1 »