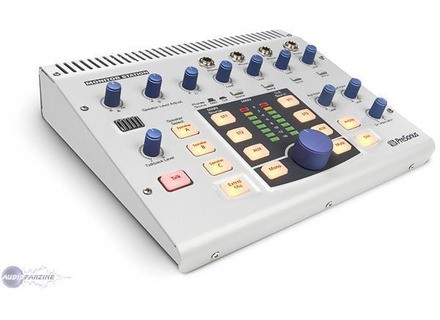 PreSonus Monitor Station
5
I've been using it for 3 years for home studio.

I didn't have the chance to test other models, but I'm very pleased with this one, and I don't have the need to get something better, for the time being.

What I like most is that it has four headphone outs that can be fed one source or the other, just like the main output.

I also use the Mono button, which allows me to verify if there are any phase problems.

The Mute and Dim functions are also useful when you are no working alone.

My only reserve would be the VU-meter, although, given the price, I can't really complain. It's useful to have a quick overview of the output level at the end of the chain, but it's not very precise.

Bottom line, it's a very good unit, which I recommend.

Its value for money is very good. If it were to break, I'd get the same one, no doubt about that.
Did you find this review helpful?yesno
»

PreSonus Monitor Station
4
I've been using it for the better part of two years together with a pair of ADAM A5 and a pair of SAMSON and I have nothing bad to say regarding the reliability of the electronics.
No button has lost precision, all stepped controls work as good as new and the volume knob works smoothly and without any noises.
The 8-segment display, which I thought was a trifle, helps me have a good overview of the output level at the end of the chain ─ easy and handy.

NB: I used the same setup to compare the SAMSON and BEHRINGER controllers and there's simply no comparison in terms of quality: Both produce hum and they are not as easy to use (they have smaller controls...).

I wouldn't hesitate to buy it again, despite its somewhat high price compared to other brands, even today.
Did you find this review helpful?yesno
»

PreSonus Monitor Station
4
I've used it for two years and I must say that it's a very good unit. The Central Station features modern electronics with automatic switching without pops or clicks from one speaker to the other.

I agree with other reviews, which provide lots of info.

Although I'd add this bit:

I like especially:
- The modern electronics, the clean and bright style and the softness of the buttons.
- The different adjustable setups (3 or 2+ sub)
- The mono button, talkback and Cue management.
- It has a transparent sound.

Its negative points would be:
- There is indeed a loud "pop" when you turn it off, so you'd better not turn it off at all...

- The plastic jack connectors, which make it seem cheap, even if they are balanced.
- The headphone amps are too powerful, in my opinion, which might be dangerous in some cases.
- I wasn't capable of correctly calibrating the VU-meter (although it could be that I just didn't understand how to do it).

To finish, I'm pretty happy with this unit. It has no direct competitors: I tested its bigger sibling, which isn't bad but costs twice as much, and considering that, to have the same comfort, you need a remote that costs the same as this unit alone (and which nevertheless remains a less user-friendly solution), it isn't worth it. Audient also has a Monitor Controller, which seems pretty good but, once again, much more expensive. Mackie's BigKnob is far behind in every possible way (noisy switches and nasty feel).
Did you find this review helpful?yesno
»

PreSonus Monitor Station
I've been using the monitor station for a week.
The product is well packaged and you can immediately feel its quality. It's heavy, its controls are covered with a gripping and nice-feeling material, while the connectors feel sturdy when you plug a jack.
It comes with a printed manual and a PSU.

Once connected, the monitor lights up and it's at this point that you have to decide how the inputs and outputs work.
You can choose whether you want to toggle input sources or sum them. The same goes for the speaker outputs.
You then have to calibrate the inputs and outputs. Have a look at the manual for a clear explanation.

Among the special features are the talkback, which is very useful, with a built-in mic powerful enough to talk into it at three feet. With a bit of noise, true, but you don't need the best quality for this!
The talkback button has a nice function: If you push it briefly the talkback remains activated, but if you hold it down it deactivates as soon as you release it. A very practical function that not all units have.

The headphone amps are very powerful and have a huge headroom.

You also have Mute and Dim buttons, as well as a Mono function, which comes in very handy when you can't do it via software or after editing something. Here you have it at your fingertips.

I can't say anything about the outputs via CUE, because I don't use them.

To sum it up, I plugged the Mac and a Fireface 800 with a pair of Fostex PM1 and also a pair of $20 Creative speakers and you can toggle between them with a baffling ease. A real delight.
The buttons make no noise when you engage them to toggle sources.

At $350, it's cheaper and better than the Big Knob.
It has no competitor, besides its bigger sibling, the Central Station, but they obviously don't cost the same and the remote is only optional.

The only two drawbacks that justify me taking a point off:
It gets really hot during use and it pops really loud when you turn off the Monitor Station first.
Did you find this review helpful?yesno
»

Published on 01/15/08
PreSonus Audio Electronics is pleased to announce the Monitor Station desktop studio control center will be shipping this month.