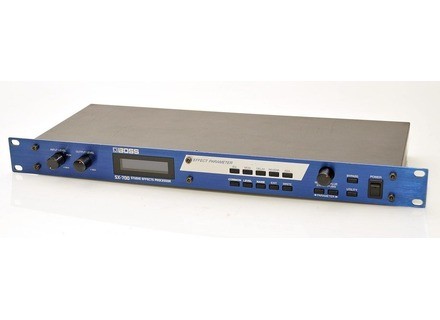 Boss SX-700 Studio Effects Processor
3
i save up and brought a sound guitar effects pedal. I got it at drum bank music and i payed £120 for it.

it has load of diffrent effect and it has lots of buttons like volume wave bass and loads more and its easy to use and you can record and play back and change it even change the pitch how cool is that.

it takes three big batteries and its runs them down quit fast which is a bummer.

the quality is alright it just needs some changes but from that its cheap fine and it has load of buttoms and switches like high volume tones effect wave record mute playback and its portable.

I thought its a great product but it broke because my brother droped it down the stairs by being stupid.

Effects (in the order of the interface)
- EQ (3-band parametric selectors with the type of curves on top)
- Modulation (Chorus (2), flangers, phasers, harmonizers, pitch-shifter ..)
- Delays (7)
- Reverb (8)
- RSS (Roland Sound Space for, a spacialisateur "3D" on the stereo, unstoppable).

They can be edited via the interface and menus (fry).

The unit, stereo, rack and is the technology used is digital.
It has MIDI inputs I / O / T a couple stereo jack format, but can be used in mono via the L, a couple of jack for output and 3 pedal inputs.

Configuration, editing and use are very simple, you can soon desired setting and can change the action "live" no worries, but it will be restricted to a parameter if you don ' not use a midi controller and 3 without MIDI but with pedals (you can also mute control via a pedal input). Several effects are stackable in the sense that we determine using the button "common" who, in addition to access to different "algorithms" (19, an algorithm is in the jargon of the unit a preset routing), we will control over the order of the stacking effect blocks (one block effect, "unit" here). To help us we have a very educational manual, as it should be from the manufacturer, but not really needed, the device is easy to access.

We find therefore a fairly wide range of effects to be stressed for some versatility and originality. Are available as a harmonizer really well done, a phaser which alone justifies its price in time, a flanger (the phaser and flanger wreak havoc on elements such percussion). The reverbs I was not fooled more than that, but I'm not really plunged. the effects of time, controllable noon (yeah!) sound great, they are groovy "as needed", if one adds the famous RSS so you can count on stereo effects really strange, mesmerizing, as they say English, Me, I love it!

It will work on just about anything you stick it to him, but it generates some effects of the blast, but nothing really dramatic.

Overall this digital sounds, if you're not careful, but good eq can sculpt the sound, harmonizers and pitch-shifter are quite good, even very useful for making agreements on a mono synth For example, effective voice, to a certain extent and according to what we seek. RSS is traveling in another stereo, something that may sound strange or bad, we have to spend time because it does not work on everything.
This unit, in addition to a slight hiss on rare effects (such leslie it seems to me) is quite clear in terms of sound, apart for its "modulations" which can be very marked, it will be difficult to recognize in a pieces to complete when using reverbs and delays its only there or modulation effects can go in all directions. The timing is very good, phasers and flangers as the chorus is passable, all sounds very different and less hot tools that offer analog, but it is not to compare.

- Purchased opportunity in a specialized shop in my town for a pittance. I have many effects, including pedals and analog for most.

- What I like: different types of effects, the possibility of stacking, editing, some quality effects, stereo / mono, triple noon, the bypass is transformed into mute ..
- The least: I did not ask, although we can regret the inability to use 2 times the same effect in a chain ..

This multi-effect is a deal on the market the opportunity to recommend the mini budget who want a versatile tool and classic, but it can be really strange.

Al x's review (This content has been automatically translated from French)

The converters are 18-bit, 16 bit effects

The effects are numriques, but the input / output analog (device dating back to 1996).

It may be in the pilot noon. The "bulk dump" can change presets with other users having the same machine by connecting the two with a cord noon. Very practical.

I put 8 / 10 only because the effects are now all have input / output to connect directly with numriques a sound card or a DTD.

Edition trs simple, and once again, the fact that the patches can be named / renamed is much more convenient than simple numros which we often forget what effect they correspond. The manual could be clearer, but you will soon arrive to operate the machine.

The effects sound good trs my ear. Some of course are more Russian than others, but the effect by using an auxiliary mixer and by applying the proper mix between the original sound and effect applied to it we get the trs things natural. I am often by reverbs numriques of quality because they have a ct mtallique, "chemical" with a "shhh" at the end of the train that I do not agr Able at all (means too that we have used the reverb on the whole). This is not the case with this one. I like that one does not hear the reverb, but that we will make it just that she silent when the rcoute and that removes the track "dry". This is possible with the 700 SX.

The delay is trs well. I'm less fanatic chorus Roland / Boss gnral, and this applies to the 700 SX. On the other hand phaser is trs "clean", trs transparent, it does not sound "vintage" and I like the sound (for the Phaser vintage "dirty", I have an old pedals which trs good effect ...).

One of the major intertidal mulitieffets what is its function 3d RSS baptized, who by a PROCD I think that must be related to the phase of the sound, cre an illusion of space three dimensions on two speakers. In other words, you can have the feel of a sound from above, in dssous or derrire us with two seats in front of us pregnant at an angle of 30 degrees, and height of the ear. It is striking when it works, but this is not the case every time, you really have to put in the right place preferences and use of sounds sharp enough to hear the effect. It is the same when dtour.

I bought the 700 SX-hand there 15 days for 220 euros. J'hsitais between the SX700, the SRV3030 Roland that I could have nine for 330 euros, and TC Electronics M300, but the quality of the SX700 and the price secondhand RSS function over me DCID and I have no regrets at all. I used it every day since, and I feel that I will rgaler with this machine.

I would do so of course the same choice today.

One regret I have not found a site / resource on which this change tips / info, or better yet send / receive patches. (If you have a tip, thank you for letting me know.)

Negraval's review (This content has been automatically translated from French)

Boss SX-700 Studio Effects Processor
5
Already old machine out in 1996.
No need to describe further cractéristiques today.
It's just an opinion compared to the multi-effects that have been around (and there were many!)
Well it is still largely the road compared to what exists today.

Config level, it has a lot of things, not so easy to set up, need to spend time there.
Edition intuitive, when we understood the philosophy.
The manual is really not that good living wage.

So that's where I think it competes with what is still largely out today (in the same price range of course, or about 500 Euros today)
The reverbs sound natural when you want to do an effect like "space" it competes well at home with the TC Electronic M-One-or D-Two.
I connected my 2 console aux send / return stereo, primarily for use with synths.
In varieties of effects, you can do really amazing things by spending a little time. Virtually everything is configurable.

It's been years (7 or 8 I forget) that I use and ja'i had the opportunity to make many comparisons, given the outcome, I'm not ready to part with it.
The quality / price ratio at the time was excellent.
What I like most is the "natural" effects and reverbs that can not be found today on the high end.

Did you find this review helpful?yesno
»
Read the 6 user reviews on the Boss SX-700 Studio Effects Processor »