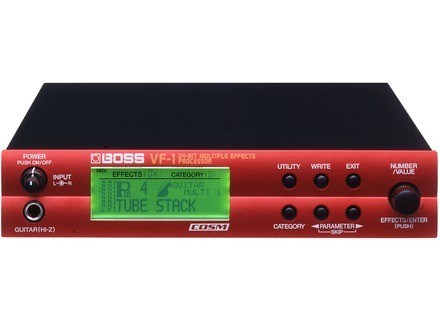 In what context do you currently use this product?
Studio resident, "all-in-one" effects processor. Time dependent, tempo follower when slicer effects are used.

Have you tested other comparable or competing products before purchasing this one?
Yes, their own SE-50 and SE-70 products. As well as SONY ones.

What are the pros and cons of this product?
The pros are that the COSM technology nails the high-gain and modern metal sounds of today, pretty much. It has a little more variation and editing details of the distorted sounds from the era. Not so much to nail vintage sounding amps as modern ones.

Another pro is that it is geared slightly more towards the DJ' and sampling artists of the day, thanks to it's possibilities to SYNC everything to MIDI and tempo. You can sync delay, phaser speeds, and reverb time to tempo (whatever that means, but early reflections and pre delays can benefit from exact tempo matching). And finally, as both the SE-50 and SE-70 had shortcomings for using an electric bass guitar, they've finally nailed it on this one. The patches and effects that are geard towards bassists only are immense here, and I've seen no one before this, or at that time, even focusing on these things. There's Ampeg cab sims, and "fretless" simulators and whatnot. An attempt has been made to concentrate on the ambient side of things in terms of room ambience or cab ambience, even with certain MIC idiosyncrasies in phase shifts, eq anomalies, and whatnot. Good attempt at that one. Mind you that the same COSM technology are used in todays multiFX from Boss.

The reverbs and other effects are in the middle ground on this one. While it works excellent on guitars and basses, I find this unit to be a little too "dull" when using it with keyboards, like - say - Fender Rhodes, which has a pristine or delicate sound and timbre. It IS mostly geared towards guitarists, bassist, and DJ producer this time around.

It has a digital SPDIF out, which can free up space for an analog input on your soundcard/mixer. Some people have discovered its traits as a AD converter, for which it is almost worth the price alone! It's that good, especially for the price you get for it today.

Slightly better display and menu editing than SE-50, SE-70, but you still have to deep-dive and cycle through menus. One minor snag is that the input and ouput gain can be confusing. Which means that you should always connect the (a) guitar at the front input (which has 1 mOhm) and not at the back panel inputs. The back panels should only be used for keyboard, or mixer send/returns. If you connect the guitar to the back panel input, all presets and distortions sounds quite dull, and lack of high end treble on all patches. Use the front input at all times! You must check out, though, that you have the latest firmware, which can be upgraded, one of the first units available to do this. It's about the slicer and tempo markings which were off, in certain patches and settings. Everything is now fixed.

Haven't needed to change internal battery as of yet, even after 15 years. But I opened it up anyway, to see if it was an easy one. It is. It's a no brainer.
Did you find this review helpful?yesno
»

Boss VF-1
5
Paid:$850(Australian)
Was originally looking for an effect which could convert a male voice to a female voice and was recommended this effect. Funny, when i bought it i didn't even know it was a multieffects, only felt it was the only equipment capable of the task besides the VT-1

I'm still discovering this effect and have been very pleased with it. My current setup is large, but just refering to the guitar section in my studio, this is how it goes:
Boss VF-1>Boss Mt-2>Boss PSM-5>Boss DD-5>Boss OD-2>Boss CS-3>Boss NS-2>Vox>Marshall Valvestate VS100
Spare Pedals: Digitech XP-100 Whammy Wah, Boss CE-5, Boss GE-7, Boss PH-2, Boss LS-2
With such a large library of effects, what i can say is that the VF-1, just as any multeffects racks would be has very strong delays, chorus, reverbs and is very versatile having many other functions like Amp simulators, vocoders, effects for keyboards, bass etc. It really works well as a central unit in my studio. However, what really makes it surpass other units i feel is it's individual control of every parameters in each effect. For me, i play with sound mixing programs like Sonar and Logic and thus understand the importance of these parameters, so commonly are there many pedals and multieffects out there that has parameters made so easy, it's only suitable for the novice musician. The VF-1 has such a large option of parameters to control, it's potential is very strong, giving accessibility to do many things.
It's acoustic sound is fantastic, and is especially strong in it's clean effects, i just took one day to control a clean acoustic-like sound that is fantastic in every account, controlled every parameter, from EQs, to reverbs etc, it even allowed me to control my mic distance in the amp simulator. In the end, my sound ended up rich, warm, acoustic and with the thickness and roundness. It would be hopeless creating such a sound with my other boss pedals. I'm still discovering more sound as days passed.

As usual, since the VF-1 is a multieffects RACK, it has poor, weak distortion and overdrive. I used to have a Zoom Valve DSP which was so bad i sold it off at 30% of the price. And the Yamaha FX200 wasn't good as well in distortion and overdrive. In conclusion, all multieffects RACKs aren't good in distortion and overdrive, that's why they are normally mixed with Pedals like MT-2 and OD-2. However, Multieffects RACKs normally have a sweeter, cleaner, spacious sound as compared with pedals.
The VF-1's Male to female pitch effect is hopeless, as i start singing, the pitch shifter doesn't follow with my voice pitch in time, making the "female" voice very plain. And forget it if you want to compare it with a real female voice. (And it doesn't look as good as a real female as well!!)


Best acoustic sound quality, good reverbs, chorus, delay effects. Reasonable wah effects (None can beat the Vox!!). Reasonable Pitch Shifting and Harmonizer (Still defeated by the Digitech XP-100). Distortion has a clipping sound to it.
Multipurpose functionality. This effect will potentially be the next cliche.
I like it's effects block function, where it can move effects around, but sadly haven't found a way yet to move some effects. Great amp simulators (But none can beat the real amps!), easy to control. Great EQs, allowing adjustment of Q(Bandwidth) which most other effects doesn't have that parameter. Looks awesome on the outside, with it's metallic red surface, really colours my studio up, rather than the plain ol' black and grey.
+It has MIDI controls, few effects have that!!
You can hook up bass with it, vocal mics, keyboards and about anything u could find a use to it.

On summary, i think this rack is the best rack i've seen so far, I don't like stuff like GT-5, ME-30 and Line-6 Multieffects pedals. I've tried them, and they didn't sound at all exceptional, they are more like an all-in-one kinda thing, but my choice of equipment is mostly looking at what special powerful sound each pedal or rack gives which make it good at what it does. Like "Spice" that adds up together to form a great dish. All-in-one kinda racks normally wouldn't be good in any specific sound effect except they'll easy to carry around, which made me refrain from buying the VF-1 at first. But after i've used it, i realised it is really good in it's clean effects and other functions, which forms the "cliche" in my studio. That fit's the "jigsaw puzzle" i have in my setup.


I've owned a lot of the amps simulated and the VF-1 nails them. It has just about every effect you could ever want and most of them are exceptional.


There's no headphone jack and it would be nice if it ran on batteries for a while.


It's fairly delicate but easy to use. It needs some kind of protection if you don't rack mount it.


This gizmo delivers everything promised and more. Lot's of bang for the buck.

Boss VF-1
4
The VF-1 was a multi effects processor that Boss released for awhile. It was, and still is, one of the few half rack effects processors out there. Their goal was to basically put every Boss pedal effect inside this small unit as well as guitar modeling and mic emulation. You can add a footswitch, MIDI and expression pedals all to the back of this little device. It was mostly made for guitar, but you can use it for other applications as well.

Boss did a great job at laying everything out in this. The buttons feel nice and tactical, and the knobs are sturdy. The fact that they managed to fit everything in a half rack box is amazing in and of itself. The buttons are clearly labeled on the front, and there aren't too hard to read in a dimly lit stage. The LCD is big and clear, so there is never an issue with seeing what you're trying to modify when making patches. Making and adjusting patches is also a breeze with this unit. The manual can assist you with anything you need, but just playing with it should be sufficient.

The sound of this unit isn't bad. The weakest point is probably the guitar modeling/microphone aspect of it. It still sounds like a modeler, and more importantly, it still feels like a modeler. This can be a bit of a turn off, but if you're looking to mainly use it for effects, it's quite nice. All the effects are laid out nicely, rich sounding and easy to adjust.

If you're looking for a half rack effects processor, your choices are fairly limited. Given that requirement, I'd say this is a device worth looking into. However, there are other units out there, albeit full rack units, that are better. I much preferred the Rocktron Intellifex for delays, reverbs and chorusing sounds. However, that's a 1U device. If space is of utmost concern, definitely check this effects processor out.

Did you find this review helpful?yesno
»
Read the 13 user reviews on the Boss VF-1 »

Boss VF-1 manuals and other files