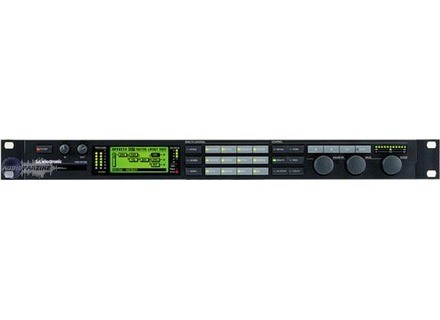 blackle's review (This content has been automatically translated from French)"Designed by Professor Calculus in person!"

Basic usage is simple, the interface is very well thought out, on the other hand to find sounds the least original and most used, it is important not to be afraid to enter the FireworX, play with settings that are sometimes many, but still understandable. In this, this unit is closer to a generator Eventide (yum) a simple style multi-effect effect.

To return to use it is near a Lexicon MPX 1 M2000 his distant cousin. Know this, because this demand effect, as the MPX 1, a great time learning to use it to the best of its ability. In a word, read the manual before you venture too far in the programming.

Normally, and almost all boiboites effect, the vast majority of brands strive to design products for clean and friendly effects of the source. Add eg a reverb or delay to a voice, a piano, and do not disfiguring. Always hear the instrument as it is. It is great being even a minimum. But it can be a boring at times. Can not find you? No?

The FireworX, he inflicts the signal distortion as wild qu&#39;étranges. More Z&#39;alambiqués and twisted each other effects, one little more original word. But also, at times, the most useless through being weird.
Just like on my old M2000 reverbs are not my favorite effects, preferring by far, other, more in this area boiboites. on the other hand wherever FireworX is strong is the set of associations happier one than the other, which are arranged in twelve separate blocks effects:
Dynamic
Filters
Forming
Distortions
Vocoder
Synth
Pitch
Chorus
Delay
Reverb
Panoramic
and
EQ

And some effects are mild names: vocoder, ring modulator, resonator, digital cruncher fractal noise generator, etc.. it makes you want is not it?

To return to the reverberations, they are not ugly, far from it, they simply do not have the smooth and chiseled that can be encountered in others. To give you an idea they are slightly below those of the MPX 1, that way I&#39;ll talk a little later (I know, I&#39;m talkative and I often have a marked tendency to scatter me).

Many other effects are very good hand with a small flat for the chorus lacking a bit of punch. The various filters and modulators are the most beautiful species and great depth, capable of the ultimate hack.

The effects of distortion and means are capable of simulating a whole bunch of big delusions, simulation telephone voice, noise generator noise, etc..
Tonal transposition is not bad and to tell you the best on the M2000.

Deadlines are in my opinion not long enough and especially to be able to complete move from a device that does just that. For the time I am probably a little hard but I still pity that Tc has not included in its FireworX at least the possibilities of their D-Two. on the other hand for sound quality, these delays do not suffer any criticism.

For so-called pan effects .. what about .. I think I&#39;ve said too much already and have sailed enough superlatives to redo a slice of more .. but I&#39;ll still you add a small layer. These panning therefore, are one of the great successes of the Tc, and use in conjunction with dynamic filters is to wonder if Leslie does not would point the tip of his nose rotary.

The Vocoder is a kind of apotheosis sound. Except with real Vocoder, the result is always a way, if not incomprehensible. Believe me if you want, but FireworX succeeded admirably where others have failed.

On the incredible creative potential. All those who love the sound hack uncompromising flow into one ear and than done as good. You&#39;re like me and you want to go further? Imagine if FireworX with this it was possible to chain more effective (I know, besides being incredibly talkative, I&#39;m also a little crazy). Can you imagine the freedom and the extraordinary possibilities? Well, it falls well as you imagine with this Tc is quite possible to insert another rack in its processing blocks .. you see where I&#39;m coming from? The MPX 1 .. and yeah ladies and gentlemen, I&#39;d rather tell you my poor Lexicon abandoned for a long time has quickly resumed service to one of the coolest gas plant that can be imagined.


Sarah. A girl a little crazy and spiritual daughter of Tryphon Tournesol. Explains everything

27 of 28 people found this review helpful

TC Electronic FireWorx
5
What are the effects or types of effects available? Dinamic, filter, forming, distortion, vocoder, synth, pitch, chorus, delay, reverb, pan, eq Are they editable yes Via a Mac / PC editor? Non S 'Is this a rack or rack MODEL yes

The general configuration is simple yes with lots of parameter The manual is clear and sufficient? Yes Editing sounds and effects is it easy? Yes but requires some knowledge, but nothing complicated

The effects are they effective, responsive and realistic enough? I find them magnifik Which instruments do you use? plug in to the console

How long have you use it? 15 years Have you tried many other models before buying it? Non
What is the particular feature you like best and least? the effect is simply excellent! How would you rate the quality / price? 14000franc has the time, but the quality is!! While still function well never worry with

Daladidoo's review (This content has been automatically translated from French)

A multi phnomnal effects simply in terms of flexibility and power. The edition of paramtres aisment is such that we can talk about this synthtiseur rack. The matrix configuration allows to chain as many effects as desire to saturation of the CSP. If you have the mind of a hacker or a sound designer and the paramtrages pousss the extreme does not scare you, this is THE ultimate machine for your dreams sound the most crazy! A real bomb!

Rendering incredible crystal clear sound. Your imagination is your only limit! Buy any Bontempi and send the signal in the FireworX: your exact is simply amazing.

I possde this rack for 2 years PRS. It is expensive, very expensive, but this level of quality leaves just speechless with admiration. Instead of investing in the latest analog fashion, so treat yourself to this unit diabolical take your music forward for insouponns. FYI, all the "distorted reality" Has RALIS using this multi effects. For sound designers, lovers and all the musicians qute of freshness in their productions. HA-LLU-CI-NANT !!!!!

DjayBuzz's review (This content has been automatically translated from French)

Menu easy to understand, control software midi sequencer (Cubase sx) easy to configure.
The presets are very easy to cre and easy to save.
The manual is in french, very well explained and well done!
The routing and easy to edit.

The bones version 1 has 200 factory presets, in version 2 are 400 and they all have a very good bill, I have not had a lot of presets cre from 0 because I have not yet toured many factory presets.
There have for everyone, voices, synth rhythm, kick ... all that goes into it can be changed by the smallest total destruction until the reverb sound, perfect for the "sound design"

I've had it for 1 year + and when I got it I finally found or venerate the effects in the largest component!
I did have yet to find a default ...
I never heard another multi effects cre sounds the same!
2330 euros is expensive but when you hear the sound quality and the quality of the machine gnrale we pass the Cape of breaking the bank pig.
If I have to redo this choice is simple, I buy 2 or 3 ...........
If you are looking for a multi effects gnraliste trs and buy high quality!
I have not over 10/10 because I have not found better.

Did you find this review helpful?yesno
»
Read the 7 user reviews on the TC Electronic FireWorx »