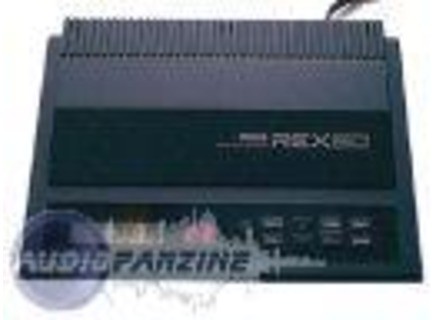 Yamaha REX50
4
In the creature more than 30 effects, chorus, flanger, reverb, delay, distortion, pan, gate and mixtures of it (as a result of both).
Their publishing in the device is possible via a number of parameters and effects are arranged savable (60 saves).
Bypass usable on / off (no knob)
No rack.
Connectivity:
Jack L / R In
Jack L / R Out
Jacks pedal (for controlling effects or changing the use of the bypass).
MIDI In
Note a potentiometer to the input jack volume.

MIDI Out is useless for a machine like that, it controls sound than MIDI data.
All this is excellent. 9.

I got this machine, I just do not know before. I wanted to try it on a piano (Clavinova CLP-130), bang in the input jacks. At first glance, when you do not know the type of gear, it is a bit lost: but the buttons are not many, so after ten minutes I had the camera functions WITHOUT MANUAL, because otherwise it would not have been funny

Conclusion: the manual is useless to learn how to change the effect used (in an identical order with delivery to start once at the end), edit effects, save editions (the edits of effects just after This almost).
Only drawback of this use: Use the up and down buttons to show (change) the current effect, but of course not as fast as with a potentiometer "value", which would have been useful . However, we can solve this problem by editing effect so that it does not perceive themselves, and change the current effect for a dry signal. As the cutoff between effects is inaudible or nearly inaudible, it returns to the prompt use of a knob. In addition, if you have a controller knobs, it is you (maybe!) possible via the MIDI In, control parameters.

Perfect use without a manual, a few small problems but remediable: it all worth 9.

In previous notice some users have criticized the distortions, something I do not understand. They are certainly different, which gives the machine a certain originality, but then to say that these effects are grimey and lo-fi? somewhat exaggerated as opinion. Know that the distortion does not sound like on other devices, where a negative view from the other affiliates.
NO, the effects sound good, I think sufficient quality. After, I do not say they are great, I remind you that this is a machine for 80 YEARS not estimate as Korg Kaoss Pad Quad's now.
A small caveat: do not go reverbs gain as is the case elsewhere. They may drop a little, but it is not a big problem.

Conclusion: the effects are good EVEN DISTO, but do not forget that this machine will be used to further spice up the sound of a device rather than an entire set, as would a mixer to a Korg effects or KPQ. It is still unusual for a device 80. Therefore I put 8.

I bought it yesterday and it made me very good impression. I intend to use it to improve the sound of a monophonic analog synth that I procure thereafter. To use this then it seems to me perfectly. The sound output is really good, something necessary for an effects processor.
This is my first processor specific effects, I am amazed knowing that the quality of the effects is not far from those that I can do with FL Studio 11. Both techniques have similar reports.

The +:
- Various effects and good quality
- "Really vintage machine" that costs nothing more Used
- Fine for couple with an analog synth, if some reverb is reduced (because it always takes a little bit .... always

The -:
- No knob, but if you take a MIDI controller could remedy (you can even put the controller on the REX if not too

Do not tell me about quality / price ratio, I was offered this machine. But quite frankly, with the current bargain price, it is good. He perhaps was not at the time of the Franks, who knows?
If we had the choice again, I honestly do not know if I would do it again ..... no knobs but really cheap and perfect to go with an analog .............. ..... I hope I do not have to ask me!

noudila's review (This content has been automatically translated from French)" Vintage"

Yamaha REX50
3
30 + 60 effects pre customizable.
Echo, Delay, Distortion, Panoramic, Pitcher, Chorus, Flanger
All the effects are stereo. Parameterizable effects are only from 30 pre-programmed effects, which limits a bit.
This is one of the leading digital multi-effects. So do not expect the Hi-Tech today. No rack for 2 cents, it has an entrance midday (the minimum) and a mono or stereo output. The output level is adjustable behind the camera.

Usage is fairly simple with no manual or handbook if you play an hour or two above. on the other hand, the manual is well if we want to know all the editing possibilities, because they are quite numerous.
The French manual is almost correct and usable, which is a feat for Japanese textbooks of 80 years.
The issue involves relatively simple menus.

The effects are largely obsolete for most, but two things still worth the shot on this little machine.
The distortion is very special. It is quite disgusting if you want a classic distortion sound. But if you want to emulate Robert Fripp's guitar when he accompanied Brian Eno in the '70s, then, I only know this little machine that can make you sound Fripp.
The "pitch change C" with an electroacoustic will give you the sound of Roy Harper 80s (and he still occasionally used today).
Just for these two sounds, I keep this little machine that is irreplaceable.
The "Delay" are not too bad and very customizable, but nowadays, considerable progress has been made.
This is the digital prehistory and you have to use it wisely and use sounds that can be done with this machine and not try to run it through effects as understood today . And in this case, it is irreplaceable for certain things.

I use it for purchase in 80 years.
It is very outdated now, but for the sounds I above (plus a third one which gives its type U2), I keep the beast and keeps it.
Note that there is an internal battery for the memory (a very standard 2032). To change this, you need a good soldering iron and here we go again for 25 years. This is the same as on synths like the DX7. Unlike the Korg equipment, the battery is directly soldered onto the board, then buy in a store component of a battery holder and put a piece of wire to replace the old.

Yamaha REX50
4
The REX 50 is old effector of 1987, dynamic frequency between 20Hz and 12kHz, 74 dB dynamic, 16-bit converter, 30 briefs in ROM and 60 RAM. The effects are classic reverbs many, insert effects, chorus, flanger, distortion (very yucky, the distortion ...). You can not use two effects together, although some programs in ROM can add distortion and classic effect. Non-rack, the REX 50 is exceeded in terms of features. The REX 50 has a MIDI In used to receive program changes or commands to the program of Pitcher.

The use is tedious: YAMAHA REX released its 50 to the glorious days when everyone believed that with eight buttons and an LCD wave could easily program. Error, error! The parameters of certain reflections are surprisingly numerous and specific (up to 12 configurable parameters for a noise-gate or gate-reverb), but it takes patience and small fingers, a result that will appeal to more patients and melted programing that fans of "Easy Listening and Quick."

If you love programming and hacking, the use of the REX 50 will not surprise you. I like, so my rating is a result. I forgot: my REX 50 has never dropped since 1989. Solid, then!

The 8 types of reverb are good to excellent, the chorus, flanger are pretty nil, the compressor sounds heavy, greasy and dirty, the pitcher will be used instead of special effects to film in the studio, the distos are zero, the delays are used but lack dynamics. If you find a REX 50, the quality and warmth of reverb will surprise you. Me, I use the REX 50 to add a little dirty and grain in my mix. The REX 50 adds depth to what you do. Good for keyboards, a bit heavy for voice, certainly good for guitars or "wet" a percussion.

This is an old hacker tool, for some applications convoluted. And as I like what is choppy, I love my REX 50. Certainly not the best moment of reverb (!), But little effect in back of a mix, it certainly is worth it. My rating is a result of what can be used today REX 50.

janouch's review (This content has been automatically translated from French)

It is coupled with a wonderful synthtiseur DX7 era to the same cool sound even more if needed quiet. (But is it possible to cool even the sound of a Yamaha electronic instrument of this era??)

It is with a guitar it gets the most pathtique. The distortion is simply laughable and screaming to be compared a good analog pedals ... I do not even talk to a distortion lamp.

In all configurations on al impression of playing in a rfrigrateur (for reverb) and then to have the robot (for chorus or pitch change, which ring false and because of DCALL ... rflexion time machine)
To top it off I noticed rsidus of electronic sounds when you listen with good headphones. On a recording of quality ca not.
That gadget. Personally I compltement abandoned numrique effects. This is the same as FM synthesis (which also specialist in Yamaha silent) it sounds cold and dsagrable.

Yamaha REX50 manuals and other files