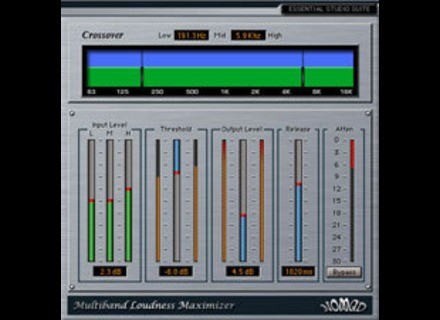 Nomad Factory Essential Multiband Loudness Maximizer
4
The Nomad Factory Essential Multiband Loudness Maximizer is a plug-in that's a part of Nomad's Essential Suite of plug-ins. The bundle contains nine plug-ins in total, all 'essential' plug-ins for mixing. I didn't have any issues installing the bundle as a whole, as it's compatible across the board. The make up of the plug-in in terms of parameters is simple, as it's really a basic loudness maximizer. The interface contains sliders for input and output levels, threshold, and release. It also gives you control over crossover frequencies. In general it's real easy to use, so as long as you understand the basic working parts of a loudness maximizer, so I don't think most users will need a manual.

The system that I'm running the Nomad Factory Essential Multiband Loudness Maximizer on is a Pro Tools LE 8 system. I've got a Mac Book Pro lap top with 4 GB of RAM and a 2.2 Ghz Intel Core 2 Duo processor, and I'm running Pro Tools with a Digi 002R audio interface. I've only tried running this plug-in on the master fader of a session, so I can't say I've ever had a problem running it on my system at home.

While it's not going to break down any barriers, the Nomad Factory Essential Multiband Loudness Maximizer is good at what it does. After trying it out a few times, I don't think I'll be using it much in the future only because I've got a series of Waves plug-ins for this purpose, which are notorious for being the best loudness maximizers out there. If you didn't have anything other than this one however, it would certainly do the job fine. It's not as realistic sounding as something like the Waves L2 or L3, but still does a good job of giving your mixes a boost in volume. The Nomad Essential bundle is one definitely worth considering for anyone who is just putting together a DAW and wants a cheap way to get a slew of quality plugs...
Did you find this review helpful?yesno
»