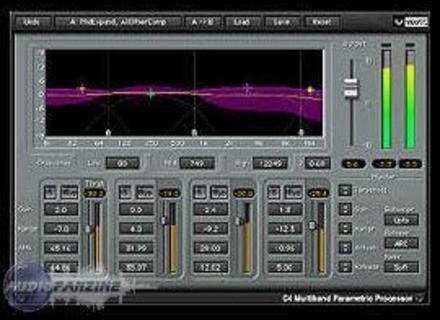 View all offers for Waves C4 »

Waves C4
5
I didn't have any trouble installing the Waves Ltd. C4 compression plug-in as there were no compatibility issues or problems otherwise.  It only took a short amount of time to get the plug-in up and running and since I have installed it on my machine I haven't encountered any issues with this plug-in whatsoever.  The interface of the software isn't hard to follow and after playing around with it for a short amount of time I was able to understand everything that was going on within the software.  The Waves Ltd. C4 has four separate sections for compressors that each control a certain section of the frequency spectrum and there is a graft that displays this, which really comes in handy.  I haven't seen the manual for the Waves Ltd. C4 plug-in so I don't know how if it is helpful enough, but I would only recommend seeking one out if you don't have much experience with compressors or plug-ins.

I am currently running the Waves Ltd. C4 plug-in on a Mac Book Pro that has a 2.2 Ghz Intel Core 2 Duo processor and 4 GB of RAM.  I run the plug-in in Pro Tools LE 7.4 that runs off of a Digi 002R audio interface.  I have also used the plug-in extensively on a Pro Tools HD, and no matter which system I use I find that the software runs efficiently and without issues.  I can run a few of them at the same time, but I tend to only use three or four at most at a time.  I've been using the Waves Ltd. C4 for about two or three years and it has been a real beneficial plug-in to have that I use a lot.

After using the Waves Ltd. C4 plug-in for the last few years in my Pro Tools system, I can confidently say that I really enjoy using this multi-band compressor.  It is easy to use and is helpful for all sorts of instruments and applications.  It has a really good sound quality and especially is good for drums and for vocals, as it allows you a great deal of control over your sound.  Since it is made by Waves you know that you are getting a good product, even if it isn't the cheapest plug-in out there.  I would definitely recommend this plug-in to anyone looking for an effective multi-band compressor, even though it isn't my best compression plug-in.