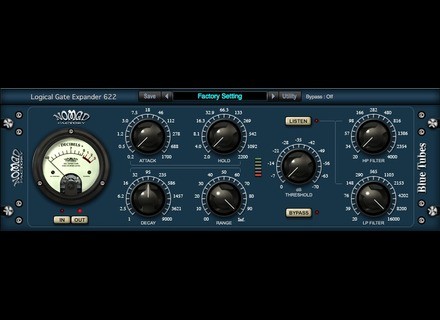 Nomad Factory BT Logical Gate Expander GX622
4
The Nomad Factory Blue Tubes Logical Gate Expander GX622 is a plug-in that's a part of Nomad's Blue Tubes Dynamics Pack. The bundle has six in total, with this one being the only gate/expander of the bunch. I don't own the bundle and have only used it at the studio where I work, so I wasn't at all involved with the installation process. It shouldn't be hard anyway, as you install the full bundle at once. Using the plug-in should be just as easy, but of course it helps if you have basic knowledge of how to use a gate. The plug-in gives you parameters for attack, hold, decay, range, threshold, and both a high and low pass filter. There's also a VU meter which can be set to show either input or output level. It does have a good amount of parameters for a gate/expander, but I like having the control for sure. I haven't checked out the manual for this plug-in at all.

The studio I work at has the Nomad Factory BT Logical Gate Expander GX622 and the Blue Tubes Dynamics Pack running on all of our systems, which are Pro Tools HD based. Our main room, which is the one I've used it on most, has a Mac Pro desk top computer with 10 GB or RAM and dual 2.66 Ghz Intel Xeon processors. I've used it on the other systems, but all of them run it about the same since they're Pro Tools HD to being with. It runs flawlessly here, but I can't really say how well it would run on an LE system or something similar...

The Nomad Factory BT Logical Gate Expander GX622 is effective and has a lot to work with, although it's not the plug-in I'll go to first if I'm just looking for a simple gate. In fact, I like using this best as an expander as I think the extra parameters cater to this best. Don't get me wrong, it's an effective gate as well, it's just not as basic and simple as some of the other ones out there to get the job done. It does it's job well but is really an extra bonus within the Blue Tubes Dynamics Pack. In other words, I wouldn't look to this bundle for this plug-in. Check out the others in the bundle that you'll most likely be using more often, and if you like them (which I do), it's cheap enough where it's worth it to pick it up. This is nice to have around, but definitely isn't worth getting the bundle for it unless you're into using the other plug-ins more regularly.
Did you find this review helpful?yesno
»