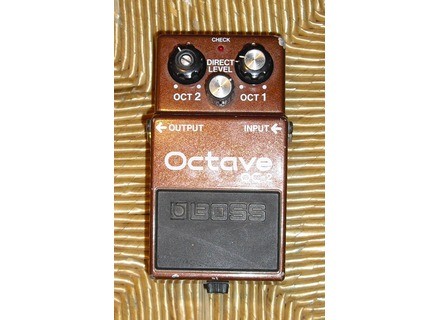 Boss OC-2 Octave (Japan)
2
I am reviewing the made in Japan version with the black bottom label.

The pedal has standard 1/4" input and out put jacks, rear 9 volt dc input jack for standard boss power supplies, and a battery compartment under the bypass "door".

Set up is a breeze with this pedal just like any other Boss single stomp box. There are only three controls and they are easy to understand. Boss has always been good at laying things out simply. I bought this used and did not get a manual but I doubt I would have opened it if I had received one.

As with all boss pedals there is the always active buffer. I have had some that were pretty bad like in the TU2 but his one was not a tone killer and since it was placed first in my chain it served to help drive my signal through the rest of my effects and cables. I have heard that the earlier versions of boss circuits, especially the ones made in japan, were of better quality.I used this pedal in a guitar set up and always kept it first inline to make sure it was fed a strong signal. Octave effects typically need to be first in line to properly track the note you are playing. Even when used first in line I was not happy with he tracking of this pedal. Higher notes were fine but the notes in the lower register like anywhere below the 12th fret on the low E just did not track. It made a wobbly sound that sounded out of tune. Even when using the neck pickup which i s supposed to make it easier for pedals to track the note I still could not get a clean octave out of it. This was with both 1 and 2 octaves below.

The higher notes that actually tracked did sound good. Other octave effects I have used gave a digital quality to the effected note but this remained smooth sounding. Having the ability to blend the two octaves and dry signal is nice but I just could not justify using this over my Digitech whammy. The whammy tracked better and when it did glitch it was not as bad as this pedal

Unless you like things to sound off, or are into noise music, I would not suggest this pedal. It just does not perform that well.