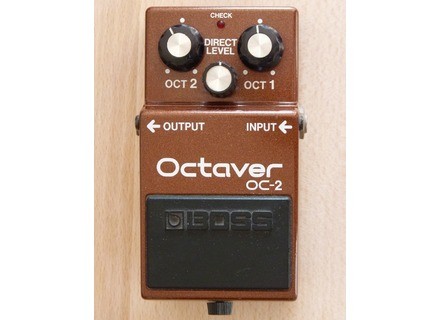 Boss OC-2 Octave
4
This is primarily an octave shifter pedal, with a few extra unique features such as the Polyphonic Effect and a drive mode which features distortion. The pedal uses digital technology. There are two quarter-inch inputs, one for guitar and one for bass, as well as two outputs, a direct out and a mono out. The direct out would take the signal directly to a DI box, and the mono would be run through an amplifier.

The pedal isn't too difficult to use. The effects are easy enough to handle. The pedal in its original mode (the same mode as the similar OC-3) is capable of blending up to three signals, the direct signal, a signal an octave lower, and a signal two octaves lower. The other option is the drive mode, which is basically adding a distortion to the signal you dial in in the original mode. .

The first octave shifter that I tried was the Digitech Whammy pedal, which colors the sound far more than this one does, but also offers you the option of shifting the signal two octaves up. I can't help but compare this pedal to that one in terms of functions, and I usually can't help but be disappointed. As far as sound quality goes though, it is a bit less unnatural-sounding than the Whammy, so if realistic-sounding octave drops are your thing, this is definitely a good pedal to get.

I think I liked the flexibility of signal the most about this pedal. The fact that I could blend three different octaves together into one signal is pretty cool. It greatly expands the range of your instrument, albeit in a limited way. The price isn't really that bad, it usually lists at about $120. I do think that you could get a cheaper octave pedal and be satisfied, but not to the extent that this pedal would bring. The sound quality is one of the more natural-sounding octave pedals I've played. I have played a few other models, and compared to this one, the sound quality was inferior, even if the functionality was greater. I would ultimately recommend this pedal to anyone looking for a more conventional octave pedal.

Boss OC-2 Octave
4
Boss has the pedal for you. If you are looking to beef up your tone and get yourself gig ready then look no further than to the Boss Roland company to help you out in all of your guitar pedal playing needs.

This is the Octave pedal that produces and effects that give you two separate octaves within the effect. This is an easy pedal to use. You have three control knobs and they work pretty well. The two octaves are on the outer sides. The middle control knob sets the overall level or volume of the effect pedal.

I find that this kind of effect works best with bass guitars than it does with a guitar rig. It certainly does sound good in the right setting with a guitar amp but the bass seems to be more apt to taking the overall effect much better in a more usable way. I like the sound of this pedal. I have always liked the cool octave sound anyway so having two separate octaves is a plus. You can dial them in to have one below and above or just having a somewhat detuned guitar tone. This is a pedal or an effect that you would use sparingly. You won't use this pedal a lot in your overall sound. It is good for solos or somewhere that a break in the music occurs. If you want to hear what an octave sounds like listen to the song "My Iron Lung" by Radiohead and the opening sound is an octave pedal, which I believe is a Digitech octave pedal but essentially the same type of sound that this pedal would create.

These pedals have been long discontinued not since 2003. They have a newer one that can be used for bass and guitar. That ones has much more user friendly controls and parameters. This pedal is great as well and if you can get it for under $50 the I would recommend picking this pedal up. It is a fun pedal for getting some very cool effects for your rig.
Did you find this review helpful?yesno
»

Boss OC-2 Octave
4
The Boss OC-2 was one of the first pedals I bought. I found it real cheap at some store, and I remember my hero Yngwie Malmsteen using one. I just had to try it out, so I bought it. It features two different octave knobs and a level knob. These allow you to choose between one or two octaves below the note -- or both.

The OC-2 is an absolute beast in terms of reliability. These things have been around forever and withstood the test of time. Failure rates are extremely low thanks in part to Boss' sturdy housing. The manual is clearly written, and they even give you a few example settings to try out. Just playing with the knobs should give you some idea as to how everything operates.

The sound of this is somewhat iffy. It does what it says though -- it fattens up the tone by adding one or two octaves to the sound. This can make your guitar really fat sounding, but it's different from a pitch shifter. I actually thought I'd be able to emulate a bass guitar sound with this, but you really can't. It's not that kind of pedal. If you're looking for some real cool doom and sludge style riffing, this pedal can help boost that low end during the heavy chord parts. Just be sure not to use too much of it or else you can get lost in the mix.

If you know what an octave pedal is and does, it's worth checking out. After all, it's the world standard of octave pedals. However, I found that the usage was fairly limited in the real world. I'm not a big doom metal player, and when I want to play that kind of music, I prefer using an aggressive fuzz instead. If you want to thicken up some clean tones, this can actually work pretty well. Overall, it's a pedal that's worth experimenting with, but I couldn't find a practical use for it.
Did you find this review helpful?yesno
»

Boss OC-2 Octave
5
Octave, it speaks for itself !!

Did you find this review helpful?yesno
»
Read the 21 user reviews on the Boss OC-2 Octave »