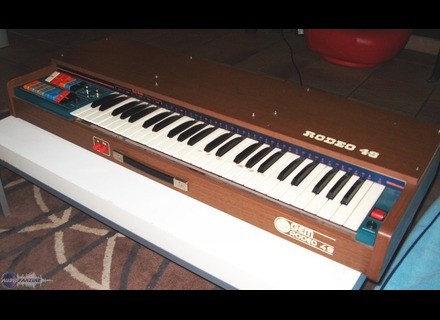 remy.maille.315's review (This content has been automatically translated from French)

How many sounds?
a choice of 6 instruments with vibrato and wah - Wah
A choice between 6 drum accompaniment

And utility connections?
A button On / Off and a headphone jack (it is!)

The simplicity of the configuration?
If we consider that there are many keys that fingers of the hands, we arrive at not err in functions

The expression is good, keypad and plastics not being sensitive (even less after touch or jostick)

The instrument is very nice, I use it for guitar solos ...

dizdaz's review (This content has been automatically translated from French)

GEM Rodeo 49
4
Analog electronic organ 70 years with a keyboard 49 keys, rhythm part and accompaniment (manual or automatic). Not a lot of controller, except the volume buttons classical general accompaniment and tempo. Two other buttons allow you to vary the type of agreement (minor seventh). Note however the presence of vibrato and a "wah-wah." The polyphony is complete but the key is, of course, not sensitive. Level connections, not much: a good old headphones, and that's it. This keyboard has an amp and a diffuser (discrete, located below) of good quality and sufficient power. Additional interesting little detail for the transport, it is provided with a handle.

The configuration is obviously very simple since it is a machine presets. Because the sounds are not editable, it is impossible to take the lead to regain his edited by chance. It is of course a strong point for using "live" but also the major weakness of the machine since it can create other sounds. The manual is hard to find, but I do not see what would be done.

The sounds are not very realistic, since from analog synthesis. But this is where this keyboard is interesting, the sound is big and hot. At both low (no preset low, but the organ sound played in the lower octaves and is really an illusion round) as rhythms (like vintage drum machines such as "boss cr78" etc.).. Rhythm patterns do not seem very many at first glance but can be combined (2 buttons are switched a third pattern different, they can be activated independently or together) which multiplies the possibilities. The presets "sounds" are not really different, but rather variations of grain and filter, but again you can independently or combine them together and allows polyphony sound combo organs warm. I recall that this is not a synthesizer, so do not expect to tweak the sounds on the machine, on the other hand when they are passed through filters and external effects, the result will be to meet your Expectations (especially organ and analog synths much more expensive). You can still hear that kind of sound in the current musical productions, in styles as varied as electronica, trip hop, britpop, soul, dub, reggae ...

I have 4 years (bought € 110, and even if I do not use it very often, I'm pretty happy when I use it). Keyboard "budget" pretty basic, but I think with a good sound with the character. In short if you want the real analog sound of the seventies (not the COD of the 80, let alone the PCM 90's) or a combo-organ of the sixties for cheap, I think you will not be disappointed on the other hand if you like a church organ sound realistic or type hammond, go your way. A very good value if you find it for € 50 on a flea market (but that is rare) and if you want a vintage sound to enrich your components, you can put a hundred euros. I would do without this choice problem because the machines pre-eighties in good condition are becoming rare and have a characteristic sound often imitated and very, very rarely matched by the newer stuff, more complicated, less solid and more expensive.