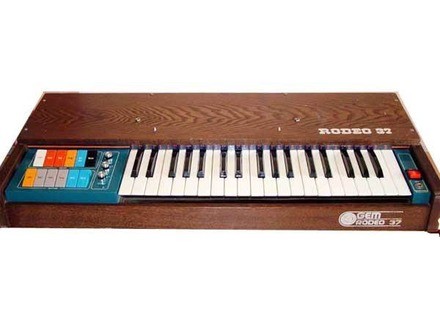 LupusMike's review (This content has been automatically translated from French)

The configuration could not be simpler, we choose a sound, a rhythm and eventually playing. You can activate multiple switches together to increase the number of sounds and rhythms available.
The sounds are not editable, so ...
I do not know if the manual is clear, I found this organ in a landfill, I have more or less patched up and go. But frankly, given the thing, we do not need manual!

I am a scratch rather rock / metal and everything in it is the distortion, so this organ does not really suit me. But hey, I used from time to time because it sounds very "generic", which I find no personality (the different ways it makes the same sound with different EQ ...) so we do not notice it too in the background, and I used mostly to train the keyboard.
The vibrato effect ... I'm never really served as a share button is broken (the effect is active, but the spring of the switch is broken at once ...), and I find it too "present", and as it is not editable, well it sucks.
I remain rather sounds the most "severe" alone, mostly the voice "Reed" and "Wah Wah" because it makes me laugh). It does not suit me specifically, but that's what I "prefer" in this organ. My key string is broken (where the spring is OK, but the voice sucks), I do not know at all if I like it or not! I find the sound "Flutes" far too dull. I do not know at all why they called it like this ...
No expression, not even sensitive to touch. It must be a very old keyboard.

I use it for 8 months, more or less active according to my desire to learn the keyboard.
I have not tried, I was not looking keyboard, but I saw it in the landfill, free. I did not spit! It's rare!
The feature I like is that it is wood! I prefer it to plastic. But it is purely aesthetic. Although AC must have an effect on the sound too ...
The price / quality ratio is excellent in my case since I have not paid. I saw on a site selling a model was sold to 89 € (probably saw opportunity in the age of the animal). Me I would have given him great maximum € 45/50 brand new ... But hey.
With experience, if I find the keyboard again, or better, or more to rot in a landfill, I think not and I take me! Seriously, if I had to buy ... Bah, already have a model like that AC is no longer (not even sensitive to touch ...), but ... I probably would take something else!
Anyway, I got it free, it works much. Then I like the cheap side, which gives the impression that the object will fall to ruin one second to another, do not ask me why! In short, despite the notes I made, I'm glad me and my little Rodéo37