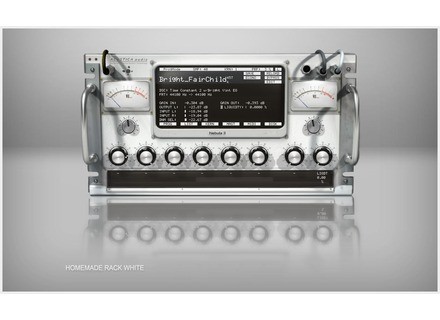 Nebula3 Pro is Acustica Audio's showcase product. Experience the full power of our proprietary audio processing technology, based on Vectorial Volterra Kernels, and find out what Nebula technology can do for you!

Nebula emulates the character and personality of analog hardware with exacting accuracy. Whether it is high end outboard equalizers, classic compressors, the latest reverbs, or vintage time-variant effects like phasers and flangers, Nebula3 Pro has them all. With over 400 included presets, you'll be adding the warmth of analog to your digital mixes in no time at all.

In addition to the included presets, customers can also enjoy the benefits of a huge collection of premium quality program libraries created especially for Nebula by certified 3rd party developers, including free, fully-functional demo presets. If you like Nebula's included preset library, you will really love these!

Nebula3 Pro features a completely redesigned GUI, and can be run using the latest CUDA processing techniques, relieving the strain on your CPU.

EDITING: Extensive editing capabilities, including renaming of programs, volume, drive and harmonic order, and much more.

HARDWARE REQUIREMENTS: SSE2 for optimizations 2 & 5
A Minimum Dual Core Processor with 2 Gig Ram is recommended. Quad Core and 4 Gig Ram and greater are highly recommended. Nebula will work on a PC with 1 Gig Ram and a single 2.4 GHz processor, but will be limited in number of instances and processing speed.
CUDA-compliant video card for optimization 12,13,14 and 15 (optional).

N.A.T.3 is a revolutionary professional tool capable of sampling nearly all forms of audio effects processors. The concept of sampling used to be limited to sounds. With N.A.T. (Nebula Application Tools) we have now made it possible for the process of sampling to include FX units. N.A.T. can sample software or hardware, analog or digital, combining various unique convolution techniques (linear, non-linear, and time variant). N.A.T. is able to replicate the original sonic behavior of vintage units like pre-amps, equalizers, tape devices, guitar and bass amplifiers, reverbs, microphones, cabinets and any time variant device like chorus, flanger, tremolo, phaser, Leslie cabinets, and more.

Clarence Bodicker's review (This content has been automatically translated from French)" the next gen!"

Acustica Audio Nebula3 Pro Bundle
5
The installation is done it without problems?

After downloading the software, you should download the preset banks (about 4GB) and several software which Nebulaman and Nebula setup, I can not speak for have not yet used, but nebulaman allows to run standalone and Nebula allows for rendering files, Cool!
It is not a childlike simplicity to install this software, it is quite confusing actually.
Installing the plugin is conventional and not a problem.
The installation of the preset is easy, but the logic is unusual and a bit odd, you must install a file in both presets using a small program ... Bizarre.
Then you must send. Acustica service via the website for the authorization and await the init file in return.


Have you experienced any incompatibilities?

Configuration in easy mode is easy but expert mode is really the Martian ...

The manual is clear and sufficient? ...

The manual is clear enough for my taste, it would be first necessary to explain the logic and philosophy of the software before it fonctionne.Mais explain how it is I got it! I do not get into a novel, but I file you link http://www.acustica-audio.com/

Nebula is a big greedy, it is because he repeatedly resample the files, I've read that had rather use the version reverb a little less greedy, there is also a small "economy" mode button.

I have not managed to saturate the proc, but I have not yet used on big session.
Clarification, if you want to use, for example a 3-band eq, create 3 plugin, because the plug can handle a bunch at once. It's a bit weird but that's how!

I use it for less than a week, I started fiddling around with the presets provided, nothing extraordinary for my taste, with some emulations magnetos, amps, reverbs and other fx that are really property. The compressors are clearly inutilisables.Je have not tried too preamps, mics and eq ... I probably would edit later because the possibilities and potential of this plug are endless.

Then yesterday I bought the stripe 76 and DME 1968's big Signaltonoize (a 3rd party developer), knowing that the compressor was the low point of Nebula, they are always in my opinion because you can not really push in their entrenchment and the settings are rather obscure in comparison to all the plugs on the market, BUT, I say "BUT" wholesale because I've never heard anything like out of a computer. All models of the 1176 I heard (Softube FET Compressor, Waves CLA-76 and UAD 1176LN not new I have not tried) are light years away from Stripe 76 Nebula they seem so bland and 2 dimensions next and I do not say they are not zero, but rather the top of the basket of models 1176 and I loved and used for years. The Stripe 76 is soft, warm, musical, 3-dimensional and is super close to the hardware, compared with my 1176 Hairball Audio. I struggled to sleep last night so the experience was good, I did not expect to much excellence. The Drawmer 1968 emulation sounds as the fire god, I never heard the original so could not talk, basically it is super warm and punchy, highly subgroup battery!

Last point: the price of this software, 139 €, is mild compared to that tenors are Universal Audio, Waves and others, taking into account the interest of the related soft and editor "third Party Developers" as Signaltonoize, Analog In The Box, Cdsoundmaster, etc ... that develop and samplent the original material, there is everything: 1073, massive passive Pultec, slices consoles, etc ... The price in the third party is variable but still very affordable between 5 and 50 €.

This plug-in is great for coloring your decision, give them life and depth for a more surgical work it will not be the right option.


6 of 6 people found this review helpful

Other Acustica Audio other effects bundles or multi-effects