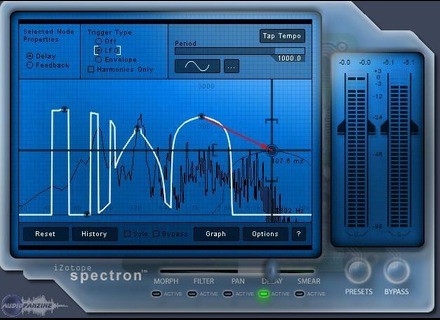 Spectron, Other effects bundle or multi-effect from iZotope.

iZotope Spectron
4
iZotope's Spectron is an application for some crazy manipulation of audio using spectral nodes and other things like that. It has a bunch of built-in effects such as delay, pan, morph and a couple others. Basically, the way this program works is that you have an audio file that you import into the application. You then drag these different nodes around the audio file and adjust different things such as only adding delay to the top end, panning one small part of a drum kit back and forth and a bunch of other things like that. The program is stand alone, so it works like any other stand alone application out there. I never experienced any compatibility issues, so no problems there. I never read the manual, but you shouldn't really need to. If you're super curious, there are some videos on the iZotope webpage regarding this application.

This is one of the few perfect applications out there. For one, this is a 64 bit program. Yes, somebody finally made a fully 64 bit audio application finally. No longer do you need the OS to gimp itself to run this application. The program itself is cross platform, too. That means that anybody on OS X or Windows can use this without any problem. It even work with 32 bit OSes, so just about anybody can use this thing. It doesn't take up too much memory when using it, but it has a high ceiling anyway, so it doesn't matter how much it takes up for the most part. It wasn't too heavy on the processor, so no issues there, either. I've been using this for a few months so I might not be the number one expert on this program.

There are some cool features in this application that can work nicely for certain genres, but I never really found myself using this too much. I have no real reason to start panning certain parts of a drum kit at certain points in a song. If I wanted to add delay to a track, I'd do it via my DAW with my favorite delay application. Basically, this program wasn't really for me. That's not to say it's bad, however. The program itself is laid out nicely and easy to use. I can't really complain about anything except that my style of music didn't really fit what this application was meant for.

iZotope Spectron
iZotope Spectron was easy to install as I didn't have any problems whatsoever getting it up and running.  There were no compatibility issues and it only took a few minutes to have it working.  The interface of the software is pretty user friendly and it didn't take me long to figure out what everything does.  The typical functions are clearly visible and anyone with experience with plug-ins shouldn't have any trouble understanding this plug-in as a whole.  The manual for iZotope Spectron is put together well, but I never really needed it as the plug-in is easy to use without it.

While I tend not to run too many of these at a time, iZotope Spectron has never given me any problems in terms of performance.  Even if I have a few up at once it seems to run okay, but I generally only use one or two at a time as that is usually what I need.  This being said, this isn't the type of plug-in that you can run a lot of a once because it does take up a decent amount of processing power.  I am currently running the plug-in on a Mac Book Pro that has a 2.2 Ghz Intel Core 2 Duo processor and 4 GB of RAM.  I run the plug-in in Pro Tools LE 7.4 that runs off of a Digi 002R audio interface.  Within this configuration I've never really had a problem with this plug-in that I can remember...

I first used iZotope Spectron about a year ago and I was immediately impressed with the detail that this plug-in allows you to use.  It shows you exactly what frequencies your signal is and then allows you to make whatever alterations in terms of EQ that you would like to do.  I generally use this plug-in on vocals and other major parts of a recording as I use other EQs for drums and guitars because you can't run that many of these at a time and it really isn't necessary to do so.  Like all plug-ins made by iZotope, Spectron is quite cheap in price and is perfect for home studio owners.  All in all, the iZotope Spectron is a powerful EQ plug-in that goes beyond what you would think of when you would think of your standard EQ.  If you are in the market for a plug-in of this nature, I would definitely recommend trying out the demo of this that is available on iZotope's website.

sin's review (This content has been automatically translated from French)" Unique treatments!"

I use Pro Tools on a 10 13 "MacBook Pro (early 2011). No problems with performance and stability even if the plug is resource hungry ...

I use it for 4 years and what I like most is its uniqueness and its special spectral processing ... Morph, Smear, Delay, Filter, Pan. Each can be modulated by LFO envelope or both of the spectral intensity at the level! It is also possible to load your own sounds to morph with.

The chorus is very detailed and defined all the quirks and filter / delay / morph are a feast for the ears!
Did you find this review helpful?yesno
»

Other iZotope other effects bundles or multi-effects