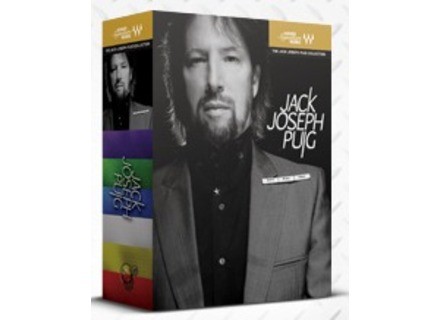 Waves The Jack Joseph Puig Artist Signature Collection
4
The JJP Signature Series is a suite of plug-ins to be used in a DAW. Installation is completed by downloading the software off the Waves website. Authorization is completed by using a USB stick as a 'dongle' or can be done over the internet if your DAW computer is online.
The Signature Series of plug-ins were designed to be intuitive and simple to use. There are different plug-ins designed for specific instruments like: drums, guitars, bass, keys, vocals, etc. Usually just opening the appropriate plug-in on your will immediately make a difference. There are really basic controls like whether a user can increase of decrease compression, but you don't have to worry about attack, release, ratio, threshold, knee, etc. All of that goes on behind the scenes. These plug-ins are most useful for inexperienced mixing engineers, or for people that don't want to spend the time to do a lot of mixing.

There is no doubt that this software is easy to use to get a good sound out of a single track. However, there are a few things to be careful about when using these plug-ins on a full mix. These plug-ins are CPU processor intensive. If you aren't careful, these things will overload your system especially if you use them on all your tracks at the same time. Another thing to watch, is that these plug-ins require ~700 samples of delay in Pro Tools 8 LE. This might not be a big deal if your DAW has automatic delay compensation to keep all your plug-ins aligned. For me in PT8LE, this delay is clearly audible and forces me to spend the extra effort to make sure all my tracks are aligned. Each of the plug-ins add a different amount of delay as well. For instance, the plug-in for drums adds a different amount of delay than the plug-in for cymbals. Therefore it is really easy to get things out of time. Considering that Waves wanted to market these plug-ins to mixing engineers that are less experienced, this delay requires the user to understand a pretty complicated problem of internal processing delay.

All of the Signture Series suites are a little bit different. The JJP Signature Series is different because it focuses on parallel mixing. In each plug-in there is a direct signal path which usually includes a little eq and compression. Then there are a bunch of sliders to mix in some things in parallel like punch for drums, 'space' (reverb/delay) for vocals, 'sustain' for guitars, etc. To me, this is the selling point for the JJP Series. I find this series to be useful on a wide range of music styles. The CLA is really great for modern rock, Maserati for pop/rap/r&b, Kramer for anything blues/vintage. If you want some plug-ins that are going to sound good on a like of different material, JJP is the way to go.

Published on 05/17/13
This month, Waves lowers the price of its Signature Series bundles and plug-ins and offers Vouchers with these purchases.