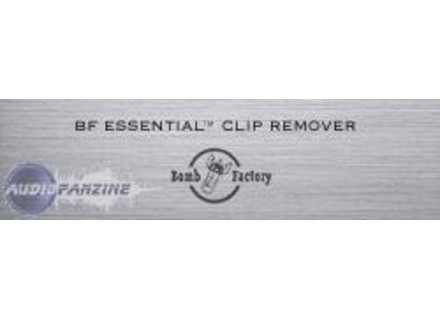 Bomb Factory Essential Clip Remover
3
This plug-in is super easily instaled and typically free as well as having virtually no compatibity issues. It's one and only function is so easily accessible that all it has is a process button!

The Essential Clip Remover works fine for it's level of accuracy and is a very easy to use.
I've used it rarely for about 7 years now and I like it as much as it deserves.

The thing to like most about this plug-in is that it may possibly save that one take for you at some point. To like least is that it's very inaccurate and unreliable for truly professional work, but it does do it's job under reasonable circumstances.
First off, you should really go as far out of your way to prevent clipping as possible especially if you are doing paid work or even if you are just doing your own music. As long as your digital recordings are sufficiently noise free and not clipped out then you have huge amounts of headroom in digital work to bring the volume up in a mix. (An appropriate way of controlling your noise level is to ensure that the noise floor is AT LEAST -45dbfs from the average dbfs of the audio. -60dbfs is ideal.)
Oddly enough, I've actually found a glitch/oddity with this plug-in that allows it to be used a really killer distortion effect, the kind of brutally mangled, bit-crushed, evil distortion that lends itself nicely to industrial music or even just as a filtered/distorted drum intro/break.
If you use a brickwall limiter on a track or a group of tracks and bounce those to a new track, while leaving the output of the limiter set to 0.00dbfs, then apply the Essential Clip Remover; the result is a truly grating, unique distortion sound. I suppose it's because the ECR looks for those 0 crossings and you sort of confuse it when your material is hitting 0 consistently yet not crossing. Try it, it's actually alot cooler than what the ECR was actually made for.
I've never used any other clip removers before simply because you shouldn't have to if you are careful and precise while recording. I have heard of some other clip fixes and software that are absurdly expensive.
Since you can typically get this for free it's certainly worth trying out whether for it's intended purpose or to just play around and be experimental with it.
Did you find this review helpful?yesno
»

Bomb Factory Essential Clip Remover
4
This is a compression/limiter program that comes with Pro Tools packages now. This is pretty awesome, as this tool is very useful to almost anyone who uses Pro Tools. There are no compatibility issues with this plug-in, assuming that your Pro Tools setup has no issues either. The plug-in is really easy to figure out and use, assuming you know it's role.
Basically, this processor will take clipped audio (or audio that is too loud to be processed by the machine, resulting in awful-sounding distortion), and will process it in order to fix such a mistake. Even the most careful engineers will eventually have some signals that clip, it is the nature of recording music. Therefore, one can either redo a take (not always possible), or perhaps use the pencil tool to trim around the waveform. This makes all that redundant.

I've never had an issue with this software not working correctly. I think that it is just as useable as any of the BombFactory plugins that currently come with ProTools. It's always a quick performance with little to no jitters. I've been using it for a pretty long time now, about two years.

I definitely think this thing is pretty great. Granted, no clipped audio is ever REALLY going to sound 100% perfect after being processed. At least it'll never sound as good as regular audio that isn't clipped. But this plug-in will make it sound right again. And it'll do it really well, usually making it worth not tracking again. Sometimes it will clip so badly, and be so damaged that no tool or plug-in can save it. That's inevitable. But this plug-in will greatly reduce those instances in Pro Tools. A highly useful plug-in, to say the least.
Did you find this review helpful?yesno
»