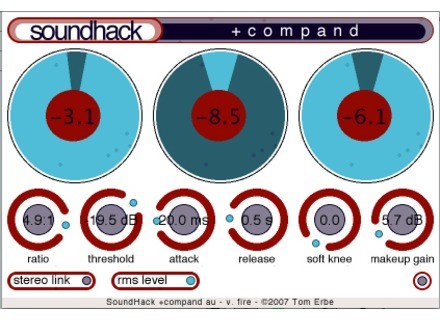 Soundhack +compound [Freeware]
4
Soundhack's +compound is a compressor/expander plug-in that is available for free within Soundhack's free bundle of plug-ins. These plug-ins are available for either Mac or PC and can be used as either VST, RTAS, or AU (Mac only) plug-ins. You can download the full bundle that includes +compound straight from Soundhack's website. Just download the proper one for your system and follow the step by step instructions and you're good to go. I can't imagine anyone having any issues with this part of using the plug-in as long as you've got the right one for your system. As far as using the plug-in is concerned, it's really pretty easy, but at the same time they're giving you a good amount of control. The included parameters are for ratio, threshold, attack, release, soft knee, and gain make up. It's also got some RMS metering. A manual shouldn't be needed, but I haven't seen it for this plug-in so I can't speak to it's make up.

I recently download the entire Soundhack freeware bundle, and I'm currently running the +compound plug-in along with the other ones in Pro Tools LE 8. I run Pro Tools LE with a Digi 002R audio interface. I'm running everything on a Mac Book Pro that has a 2.2 Ghz Intel Core 2 Duo processor and 4 GB of RAM. I've only thus far used this plug-in a handful of times, only running at most two of them at once, so I haven't exactly tried to max out this plug-ins performance, but I think that as long as you are currently able to run some plug-ins on your system without problems, that you'll be okay with this one.

Soundhack's +compound plug-in is a nice little compressor/expander plug-in, although I'm not sure that the sound makes it anything to write home about. Don't get me wrong, there's definitely a good amount that you can do with it and it doesn't sound awful at all, but I probably wouldn't use it for any serious mix. I figured I might as well try it since it's free and all, but I don't know how much further use this plug-in will see in my home rig. I think that everyone should give it a try, but I've got other plug-ins that I've paid for that I would much rather use when it comes to compressor. There are other plug-ins in Soundhack's freeware bundle that I've used more than this, so it's definitely worth checking out the full bundle...
Did you find this review helpful?yesno
»