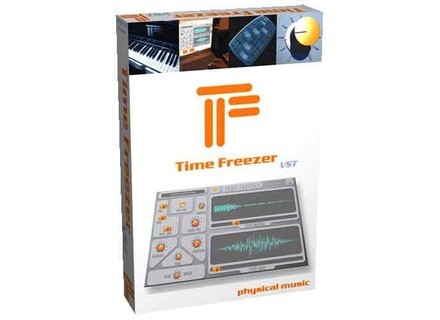 seb.petit1's review (This content has been automatically translated from French)

Physical Music TimeFreezer
5
No particular difficulties.
The manual, translated to the woodcutter, does not detail all the controls noon, but the creator of the software responds quickly and French, as it is French.

After 2 months of use, I confess to being still under the spell of this little gem of software.
I'm a fan of long cloth to create atmosphere, or "Rhythmic sounds" and that log can create very rich sounds, as derived from music, and very quickly, then create a change in those sounds so different from that which is conventionally used.
I am disappointed not to have polyphony which may have an interest promptly, but more detail and not the spirit of the soft anyway.
There are no apps that I know of equivalents and the price is just fine for a synth to be used sparingly but can provide an indefinable charm in one piece.
Did you find this review helpful?yesno
»

Colin Christian's review (This content has been automatically translated from French)

Physical Music TimeFreezer
5
I had some problem with this software DOWNLOADS partly to the change of transfer function of the designer and also certainly raise my inexprience. But the designer Frans t serviabilit great and speedy resolve the problem. This software is of great simplicity of use with a manual Franais online. It opens, for now, a small road not yet explored but which s'avrer more significant than it seems.

I use it for two weeks and is stable to use. He has little parameter of contrle, of his young age, but it filled her role magnificently to freeze any sounds that he proposed. His desigh is also a bit crude, but it does not harm its use.

In the first synthetic version can introduce all sorts of phrass that display their graphics and pointing a place where voiced his correspondence synthtise. The continuous sound produced is far from being static as it pulsates according to lgres changes the width of the beach which was freezing (up to 1.5 sec.je think). It just then displaces the cursor slowly along the beach to fix another place or the point directly. The large deuxime intrt this unit is that it is a button mni morphing that is used to control the speed of transition between each change of parameter including keyboard notes cheeks (mono) and above all points between sounds and graphics notched webs volutes transcandent the mere sound gel.
The FX version rule at the time that we DCID, all synth sounds on the keyboard and jous ternise while you can still play our way. When one mentions that it is not mono he can freeze time, but note that it can only make a rule once. So we just freeze an agreement containing as many notes as you want or we can produce and then improvise on this web endlessly.
This software is a contribution indita emptied the world of sound research. If the designer whether attention, the possibilities of complexcisation processing rules even wider range of possible environments. A new tool that is not essential but competition for those looking for availing oneself of anything that can help push the boundaries of sound creations.

Published on 05/30/11
Physical Music has updated the Mac OS X VST version of TimeFreezer (and TimeFreezerFX) to version 2.6.