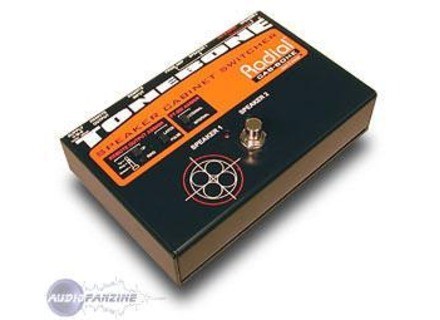 Tonebone Cabbone, Pedal/Controller from Radial Engineering in the Tonebone series.

Radial Engineering Tonebone Cabbone
4
This is another Radial switching device. This one lets you switch one head into two different cabs. Comes in super handy when using a channel switcher where you want the clean sounds coming from an open back or ported 2x12 cab and the overdrive sounds from a 4x12.
You got your jack for the power supply, and the 1/4 inch jack for the remote input and output, as well as four 1/4 inch jack for you amp and cab, those are all for use with speaker cable of course.
Basic set-up is a breeze, plug you head into the input, and your two different cabs into the output.
You're good to go. This is assuming you have both cabinets with matching impedances. So..two 8 ohm cabs, no problem. If you have say a 16 ohm 4x12 and a 8 ohm 2x12 the alternate jack is used. here's what happens, on amps like Mesa where you have different output jacks for different impedances i.e. one 16 ohm, two 8 ohm and two for ohm jacks you'd run a speaker cable from the 8 ohm jack and one from the 16 ohm jack to the switcher and you have matched impedance on either cab. Now using something like an old Marshall or any head where instead of different outs for each impedance you have a selector switch you're going to have to make a decision. As a rule I find when using a mismatch running the head set to the lower of the two impedances will work fine. In other words 16 ohm 4x12 and 8 ohm 2x12 set the amp to 8 ohm and you;ll be fine.

In addition to this on the Cabbone you can use the remote as a master or slave. In master mode you can use it to toggle other relays, which for my use is fairly unimportant. As a slave where you end up programming a midi switcher to take care of it...this is where this box shines. Especially when used together with the Headbone VT amp switcher. Imagine the possibility...one button push and you go from amp1 with a 2x12 for a clean sound, to amp2 with a 2x12 for a dirty sound, to another stomp of the button amp2 with 4x12 for a lead sound. Brilliant.

The same caveat applies to this as for the Headbone, if you use the build in footswitch on your pedal board you're going to have very long cable runs from the back-line to the front of the stage and back. And who wants to stand on cables all night long. Then again, that is what the remote jacks are there for. Unfortunately you're then unlikely to see the LEDs, but that is a very small niggle.