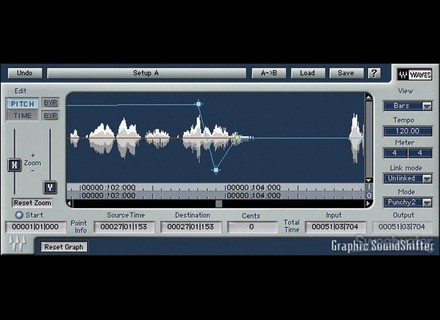 Waves Sound Shifter
4
There were no installation or compatibility issues getting Waves' Sound Shifter set up. Although I have never used the manual as I have not experienced the full version of this plugin (only available for Pro Tools users) and felt the necessity to look something up, I can imagine it would be very informative and clear as with the other Waves plug-ins. The set-up of my version is very simple - tonal shifts in semi-tones and cents as well as transposition options in intervals. All of these can be automated in your DAW as well to give a vast range of desired pitch shifting effects. In addition there are various other parameters and modes to keep you busy.

Running on my MacBook Pro with an 2.7Ghz Intel Core i7 processor with 4GBs of RAM Sound Shifter works like a charm. It doesn't take up much CPU usage running along side a sizable array of other VSTs and is reliable and stable. I have found lots of success using this plug-in to automate pitch in my DAW and have been using it solidly for the past three months. At the time being I am satisfied with the capabilities I can draw from this plug-in without it being the full version. I have better VSTs for time manipulation but really have struggled to find good pitch shifters. There is something of great promise in Sound Shifter and I am determined to use this plug-in to it's fullest extent. Luckily one of the production studios at my school runs Pro Tools and has the entire set of Waves plug-ins. Although I haven't had time to check out Sound Shifter in that environment yet, I am excited to try it out when I go back.

Overall, Waves' Sound Shifter is a great pitch/time shifting plug-in that can easily be automated to fit your specific need. Like all of the Waves plug-ins, it is very reliable and unobtrusive. The only pitch shifting tool I used before this was the stock Ableton Frequency Shifter, and I am very happy I upgraded. Yet the fact remains that this plug-in is not available in full form to those of us who do not use Pro Tools. This simple fact has had me keeping a keen eye for better alternatives.
Did you find this review helpful?yesno
»

Waves Sound Shifter
4
Pitch shifting is an awesome tool if you know how to utilize it. You can do all kinds of different crazy effects with this, and you can even fatten up a mix by imaging the actual track, micropitching it and delaying it just a tad. This plugin is a very powerful pitch shifting program that allows you to do all kinds of stuff regarding pitch and even time. The plugin has the following features: SMPTE formatting, time signature selection, transient/smooth/sync/punch modes, reference modes, time controls -- radio, source, pitch, semitone adjustment, various intervals, reference frequency source and destination value, and a ton more that would take forever to list. To use this, simply enable it on whatever buss you want to pitch shift. It can't be easier, really. The plugin is complex enough to where you can do a lot with it, but it's not so complex that it's impossible to use.

Let me list one major flaw with this plugin -- the full plugin is Pro Tools only. That's a huge disappointment for those of us who don't use Pro Tools... Anyway, onto the regular compatibility bit:

Waves is pretty famous when it comes to both compatibility and stability. For one, these plugins are rock solid. I've never experienced any problems using these. There have never been any freezes, glitches or anything bizarre going on, even with a fairly heavy usage of other VSTs in the DAW. This is also cross platform compatible, so anybody on an Apple or Windows computer can easily use this without any problems. There is one problem, however. In OS X, this plugin is 32 bit only. That means that your DAW needs to enable a special bridge application if you want to use your environment in 64 bit while utilizing these 32 bit plugins. It's does it automatically, but I'd like to see the next revision be a 64 bit plugin if possible. I've been using the Mercury bundle for half a year now, and it's been a wonderful experience.

Aside from the major flaw of this only being fully compatible with Pro Tools, it's a pretty solid plugin. I used it on my friend's machine with Pro Tools successfully before, and I enjoyed it. For those of us who need to look for alternative plugins, try searching online. I found a handful of different VSTs I've used that can give me a similar effect, although I haven't found a free one that's quite as nice as this is...
Did you find this review helpful?yesno
»

Waves Sound Shifter
4
The Waves Ltd. Sound Shifter is a pitch shifting plug-in, coming in just about every format of plug-ins available. I didn't have anything to do with the installation portion of using this plug-in as it was already installed on the computer in the recording that I used it at. The interface of the Sound Shifter is very simple to follow. It has parameters for semitones and cents to set how you would like pitch shift your sound, as well as for interval if you want to set it that way. It then has parameters for frequency for both the source and destination. It also has a slider for ratio and a number of different modes to choose from. I've never had a problem using the plug-in, so I don't think a manual is necessary unless you are a beginner or are having technical problems.

In my experience using the Waves Ltd. Sound Shifter I've never had even the slightest issue when it comes to performance. The plug-in is one that won't take up much processing power at all. I've used it in a Pro Tools HD system with an Apple G5 computer, so I can't really say how well it would run in an LE system or something comparable. Having said this, I really don't think anyone will have a problem running it as long as you have a system that you're currently able to run plug-ins on well, as this is one of the least processing power taxing plug-ins that I've used.

Overall, the Waves Ltd. Sound Shifter isn't one of my favorite plug-ins. While it will certainly do as advertised, compared to some of the other pitch shifting and tuning plug-ins out there, this doesn't have much versatility. I would imagine that most users out there looking for a pitch shifting plug-in would like it to also have tuning capabilities, which this one does not. While it does have the high quality of sound that you'd expect from Waves, the versatility is severely lacking and is the main reason that I'd recommend looking elsewhere for a pitch shifting plug-in...

Published on 05/02/16
Today only, buying Waves' SoundShifter plugin for the special price of $49 allows you to get Morphoder for free.

Special offer on the Waves SoundShifter