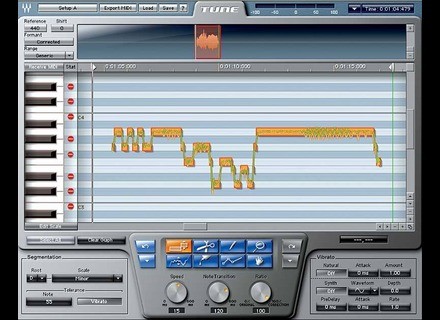 Waves Tune
5
I'm a ProTools user so ,if you are too, just be sure the plug in/bundle is compatible with your OS and your software, (this same applies to MAC and PC users). Waves does great job of providing updates and fixes for their products, but be warned, you can easily mess yourself if you install the wrong version or update the WaveShell to an inappropriate version. Waves does provide very detailed lists and guidelines for how to do the upgrades/installs but they are a bit confusing and convoluted sometimes. I suppose that is what you have to deal with for buying such absolutely great products. As much as I love Waves products I have to say that their manuals, however detailed, really seem to leave you hanging alot of times. However, if you go to their website you can find a ton of video tutorials that are incredibly helpful. They also have "decent" customer service.
All of the functions are relatively straightforward once you have familiarized yourself with their operation. Some, like the vibrato for instance, are a bit unnecessary in alot of cases but are nice tools to have in the arsenal when you really need them.

I've been using Tune for about seven years now and I must say that it takes awhile to get used to and a bit longer to master.

First off, as powerful and helpful as this product is, there are a few things you need to know before using it.
-Always apply this plug-in first in your track plug-in list. This is not covered or even mentioned in the manual. Using other plug-ins "behind" it is no problem, but if they are placed before... then Tune will behave very erraticaly to the point of being useless.
-It is immensely helpful to know the key and scale of the song. Applying those values into the interface will make your job significantly easier in most cases.

Tune is a huge CPU hog. If your computer is a really slick machine, perhaps you may be able to get by without any problems. For me, Tune really disagrees with some of my more CPU hungry plug-ins.

At any price, this is the best, most transparent, and easiest to master of all the tuning plug-ins available. It will take you a bit to get there, but trust me, once you've got a handle on it, this plug-in will shine. At some point, after learning it's quirks, you can produce corrected vocal tracks that sound flawless and untouched. Also, you can create synth style voices easily. If you are looking for a high quality tuning plug-in, then you've found it Waves Tune.
Did you find this review helpful?yesno
»

Waves Tune
4
There were no compatibility or installation issues getting Waves Tune up and running. Although basic pitch correction is easily accessible, the more expressive and in turn more complicated ins and outs of the plug-in take a little while to figure out. However, the piano-roll slash graphical interface makes any and all correction visual, allowing for a better understanding of the transformations you're enacting on the signal. The manual for Waves Tune, as with all of the other Waves plug-ins I have used is well indexed and helpful.

Running in Ableton Live 8 on my MacBook Pro with a 2.7Ghz Intel Core i7 processor and 4GBs of RAM, Waves Tune is as smooth as clockwork, but worry not Windows users as this plug-in is cross compatible. Being fairly light with regards to overall CPU usage, it is stable and reliable even in situations where many other effects and VSTs are operating simultaneously. As far as performance is concerned, I use Waves Tune for minor vocal pitch corrections mainly. Although I know it is capable of producing more a drastically auto-tuned signal, I don't find myself needing that function in my own productions. But for what I do use it for, little pitch corrections with a skilled vocalist, it works flawlessly and is fairly simple. I've had Waves Tune for almost four months now and I certainly don't regret my purchase.

Overall Waves Tune is a must-have if you are a producer who is doing some recording and needs the pitch to be precise. Despite the learning curve, Waves Tune has a fabulous sound and is not too demanding of a plug-in to conquer. As far as price is concerned, you can pick this up in its Native version, in the Vocal package deal, or the Mercury bundle deal. This is one of the few Waves plug-ins I wouldn't discourage picking up in its Native version. Originally $400, it is now on sale for $99 on the Waves website. Not a bad deal for such a versatile device, but probably still more bang for your buck if you get either the Vocal or Mercury bundle deal.
Did you find this review helpful?yesno
»

Waves Tune
4
Everything was pretty easy to get going for with this Waves Tune Plug in on my system (Macbook Pro, 2.2 Ghz, 2 GB Ram). Its actually one of the better tune plug ins out to me. I chose this over Antares Auto Tune.

I run my Macbook Pro with Pro Tools LE 7.4 and a Digidesign 002 rack and Auto Tune works great with it. I haven't had any problems with running it except sometimes it slows down a bit when too much information is going on, but I guess that is to be expected.

I've owned Auto Tune 5 for about 10 months now but I had been using an earlier version for about a year and half before that. I love the interface of the software, both in graphical mode and in automatic it is easy to configure and to tune things up with. The sound is pretty smooth, along it really depends on the singer. If a vocal is relatively close this thing works great for just making it that much better. However, it can definitely sound computer generated if you try to stretch its limitations on a poor singer. Although I have yet to use Melodyne, it seems some of their new products (Direct Note Access) may have Auto Tune beat at this point and when Melodyne releases their new software I may have to switch over to that simply because it has more features, although I'm sure Waves will have a response to it. Auto Tune is a bit pricey, but for me it is essential to have when working with clients.But with all of the different auto tune programs out there on the market now, this one is the best because its cost effective. Not really expensive and the upgrades are frequent and free of course. So no need to keep purchasing upgrades for it. Just download them from the website. .

Waves Tune
4
Clean singing tends to have a few major drawbacks that come with it. One is pitch, one is "ess"ing on certain notes and the last is breathing. All three of those things can totally ruin what would otherwise be a perfect take. Thankfully, Waves offers solutions for all of those. This is a plugin to help correct pitch, and I'm sure you've all heard this in use before. The plugin is super powerful, and you can do some very solid pitch correcting with this plugin. It has adjustments for reference pitch, shifting, formant correction, range, receive/export MIDI, segmentation, scale, tolerance, vibrato, speed, transition, ratio, attack, amount, synth, waveform, pre delay, rate and more. To use this, simply enable it on whatever vocal buss you have inside of your DAW, and you're good to go. You'll want to have this before you effects for the cleanest possible correction. I never read the manual, but as long as you have some sort of grasp on basic music theory, it should be pretty easy to use.

I should first start off by saying that I never once used this to try to get those crazy auto tuned vocals where it snaps to the grid. It just never really appealed to me, so I didn't bother testing to see if it would work. I am mostly a death metal musician, so I don't use this too often. However, when I'm messing around with 80s metal and rock tunes, this thing has saved me quite a bit. If your singer is missing the pitch a lot, I would recommend you get him to singing lessons or have him practice a lot more. However, for those times where the note is very close but not quite there, this tool is perfect.
Did you find this review helpful?yesno
»
Read the 7 user reviews on the Waves Tune »

View all 37 videos of Waves Tune »