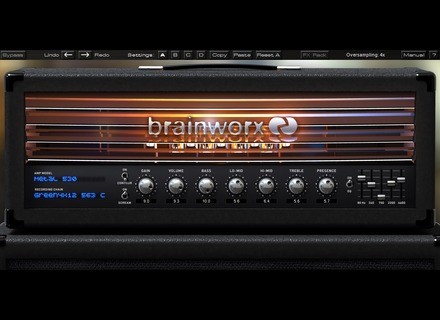 All user reviews for the Brainworx bx_rockrack

Brainworx bx_rockrack
4
RAS .. this is a VSTi ... the book is nice and not making head

I use it for a few months, so I did a review on this soft ... honestly it sounds really good, maybe it's not the most faithful perspective "I copy the sound" .. but playing on the eq and the cab has a band we always get closer to the original (transplanted version of course)
So the sound is not much to say .. this is actually a very good simulation (even better now), it is easy to adjust and it sounds realistic. for example, the JCM800 well control knob. the simulation provides useful tools and simple to make his sound in a context of "miking" (eq graphic high pass filter and low of 30 to 35000Hz, set to "shred" which boosts the sound a bit and removes frequencies acute annoying, very good that delay down to 15ms)

The only problem, if it is because the plugin called Brainworx rockrack .. so the tone is that some sounds will be more or less easily accessible. It is rather in the spirit of Softube (metal amp room), ca is not everything but it does very well. There bcp less amps available than the competition (even if we often buy more like AmpliTube 3) and quite a few cab and mic available at this time .... there will probably updates in the future ... it says if you do not seek a particular sound and we just want a good clean / crunch / distortion, all relatively versatile anyway, preferably in a register jazzrock / rock / metal , regardless of whether it sounds like this or that amp .. this is an excellent choice.