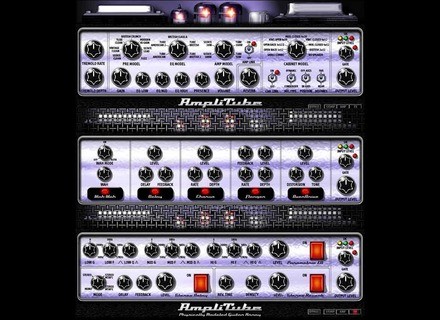 The manual that is included with the software is quite detailed , enough to get more than a basic understanding of the program.
The setup doesn't require a lot of time or effort , it's very fast and easy to set.

The software works great in its configuration.

The software is stable , level of stability is huge , very well settled product from IK Multimedia as you would expect.

I'm getting great performances creating my own sounds with this amp.

The depth of the emulation and the quality is stunning , and combining with the effects you get a result that is as close it can get to a real guitar.

I also like the Drag & Drop which is very useful and doesn't take a lot of time.

My opinion about the value for the price is amazing , you can get this product for about 200$ , but getting such a musical tool for this amount of money is great.

Precision and quality of the sound is without a doubt probably the best it can get , not a single amp gives such a richness to the sound , such a power , depth and timbre.

I've tried several models , Amplitube and Guitar Rig are top ones for me , I pretty much put them on the same level.

Knowing what I know, I would get this product again , really love how simple is , how cheap it is and how great it is.
Did you find this review helpful?yesno
»

IK Multimedia AmpliTube
5
There weren't any kind of compatibility issues with IK Multimedia - AmpliTube.
The manual provided by the soft is quite clear and enough to understand the basic functions.

The general configuration and setup is quite simple and fast, in just a couple of minutes you would have your own guitar AMP that you can use to get some great sounding guitars or even use on other instruments to get some weird effects.

The typical functions are quite accessible and clear and are easy to follow the way the soft works, every preset is well placed to be easily found and use.

The software works good and the gear is stable , however sometimes I had my Daw crashing because of this AMP, so keep that in mind to save your project along the way.
I'm getting good performances regarding emulating a real guitar sound , you know those Coldplay'ish sounds.
I've been using this Amp for a while, I would say a couple of years , and it's a great program.

What I like most about it is that it doesn't require a high cpu performance, I also do enjoy the design that is quite amateur but that's the catch, that way the work flow goes much much faster and more pleasant. I like also how much presets it provides and how you can contemplate something really unique and manage to achieve that effect or sound.

The price of this product is not very high so it's available to anyone, it doesn't cost much , around 200 $.
Precision and quality of sounds as I mentioned are great, this product is one of the top regarding amp emulation.

Knowing what I know, I would buy 2 programs , this product and as well Native Instruments Guitar Rig that is quite fun to play with.
Did you find this review helpful?yesno
»

IK Multimedia AmpliTube
3
Amplitube is one of the plethora of modelers out there for the computer. Basically, you get some sort of mic pre or interface, plug it into your computer and then plug your guitar into the interface. This will allow you to play amp models and effects through your computer. The application itself can either be stand alone, or you can enable it in your favorite DAW. Either one will work perfectly fine, but I have a feeling anybody who is doing recording will enable it via their DAW. I didn't experience any compatibility issues with it, so there are no issues there. I never read the manual, so I can't comment on that. It's pretty easy to set up, and everything is laid out in a mostly easy to understand manner.

I experienced some stability issues with this program. It would crash randomly, and I would have memory errors for whatever reason. My computer is no slouch, so it had to have been the actual application causing the issues. I never experienced the program hogging up too much memory, but it still took a decent chunk. If you're running a computer that's a bit dated, this software might not be the best. The worst part was the way it sounded. It sounded very much like a harsh and sterile modeler. I wasn't able to dial out that specific treble that modelers have, and the feel was atrocious. The effects weren't that great, either.

If you're looking for some sort of amp modeler out there, I recommend the many free solutions. Not only do they cost nothing, but they also sound better. Just get some sort of impulse loader for your DAW and you should be good to go. I can't really recommend this software, but I've heard some decent tones out of it from other people, so I can't totally dismiss it.
Did you find this review helpful?yesno
»

bENORMUS's review (This content has been automatically translated from French)

IK Multimedia AmpliTube
4
Easy very easy
See what others have already said this.

My config is quite comfortable 1 GB of RAM AMD 2600+ and it turns to Amplitube fingers in the nose, except that it has no fingers to turn pale but its number of herbs guitarists.
Many presets are available, we can add over time and thereby be taken to Santana, Hendrix, The Edge, ...
Do not have an exceptional guitar, or pre-amp ddi worthy of the name, I can say that a simple low-end Epiphone sound almost like a Fender Strat 3000 euros grace this plug-in which I worships.
Of course in absolute prfrerai I record a super skyscraper on a Roland JazzChorus but lack of resources, this plugin allows me to illusion.

For me this is the best amp simulator available in comparison with Izotope Trash parat me really means in terms of sonorits.
on the other hand must forget what plug-ins for bass. In fact I think he has a way to kill any lower, although registered or not.
I will say one thing to conclude: "Amplitube IK Multimedia, waiting only you!"
Did you find this review helpful?yesno
»
Read the 13 user reviews on the IK Multimedia AmpliTube »