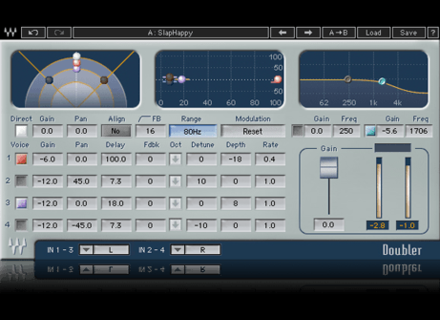 View all offers for Waves Doubler »

Waves Doubler
4
The Haas effect is one of the most used (and maybe overused) effects out there. It can really thicken up a mix. Basically, you're doubling a track, delaying it a touch and then maybe adding some modulation to it. That creates the illusion that it was done twice and gives you a super thick sound. To use this, you simply enable it on your buss and start adjusting. I didn't experience any compatibility issues, so I can't comment on that. I never read the manual, but that's because I don't have the patience. This plugin is one of the harder plugins to use that Waves offers. I recommend testing out the different presets and seeing how they work to get a good grasp of how what is effecting what. After that, you should have a good idea as to how everything works.

This plugin is more complex to use. It sound great, but it can be a real pain if you're just looking for a quick Haas effect. I usually just do that kind of stuff manually as it's quicker for me to get the results I want. I usually stay away from this on distorted guitars, but it can work out nicely for clean guitars that were only one take. Check it out, you might like it.
Did you find this review helpful?yesno
»

Waves Doubler
4
The Waves Ltd. Doubler is essentially a chorus plug-in that comes in formats of all types. The plug-in is found in almost every Waves bundle, so if you've got any of their bundles, chances are that you have this one. It shouldn't be hard to install whichever bundle you're installing when you install this plug-in. I don't know if the plug-in is available as an individual plug-in as I got in a bundle myself. The plug-in will actually show up as two separate plug-ins in your audio suite - Doubler 2 and Doubler 4. They're the same except that, as you might have been able to guess, Doubler 2 is a stripped down version with only two voices to work with. Either way, the interface is virtually the same, with each of the voices of doubling giving you control over gain, panning, delay, feedback, octave, detune, depth, and rate. You also have control over the original voice, with parameters for gain, panning, alignment, feedback, range, and modulation. There's also an overall gain control slider and a few graphs to help you see it all visually. I haven't had a look at the manual for this plug-in.

I'm currently running the Waves Ltd. Doubler plug-in on my system at home, where I'm running the newest version of Pro Tools, Pro Tools 9. I'm running it on a Mac Book Pro lap top that has a 2.2 Ghz Intel Core 2 Duo processor and 4 GB of RAM. I've got Pro Tools running with a Digi 002R audio interface or I run it standalone. I can't say that I've ever had a problem running this plug-in within this system as I've only had a need to run one or two of them at once at most...

The Waves Ltd. Doubler is overall a pretty sweet sounding plug-in that gives you a lot of control to work with. It's nice to have a stripped down version of the plug-in in the Doubler 2, and the option to have more control with Doubler 4, both of which come standard with Waves Doubler. The sound in general is silky smooth and full, but it's really about what you do with it since there is so much control and so many possibilities. It's a Waves' plug-in so you know you're getting the top signal processing technology inside the box here. Again, not sure if this plug-in is available as an individual, but if you have any Waves bundle you should have this one, so definitely give it a shot if you haven't yet.
Did you find this review helpful?yesno
»

Published on 04/24/16
This Sunday again, Waves offers special prices on three of their plugins.

See all 33 photos of Waves Doubler »