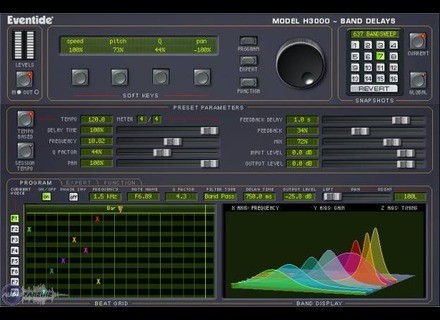 Eventide H3000 Band Delays TDM
5
The Eventide H3000 Band Delays TDM is a plug-in designed after the hardware version of the H3000.  While it may not have the same type of sound as the hardware version, it is an easy plug-in to use and does have a great sound.  Installing the plug-in wasn't a problem at all as I didn't have any compatibility issues or other problems.  The interface of the software is pretty user friendly as everything is pretty easily located, although I will say that there is a lot going on here and that it did take me a few minutes to figure out what everything does.  Regardless of if you are familiar with the H3000 in hardware form, this is an easy plug-in to use and I would only suggest looking at the manual if you are a beginner.

The performance that I get with the Eventide H3000 Band Delays TDM plug-in is pretty good overall.  I haven't ever had an issue running it, although I haven't had a need for running more than two or three within a single session.  I have run the plug-in on an Apple G5 and a Pro Tools HD system, so if I wanted to I don't think I would have a problem running a lot of these at once.  I can't really say how well this would run if you had a native version in a Pro Tools LE system, but I think that as long as you have an adequate system where you are currently able to run plug-ins on, you shouldn't have a problem with this one.

My favorite aspect of the Eventide H3000 Band Delays TDM plug-in is its versatility.  While it took me a few tries to get used to all of the parameters that this plug-in has to offer, it is this versatility that really makes this a great plug-in.  The interface is laid out well for something with so much to play with and I'm a big fan of the overall sound quality.  While it doesn't sound the same as a hardware version of the H3000, it is a whole lot easier to use and will cost you a lot cheaper.  If you're a fan of the H3000 or are even just looking for a great sounding plug-in with the ability to split up bands and effect each, definitely look into getting this plug-in.