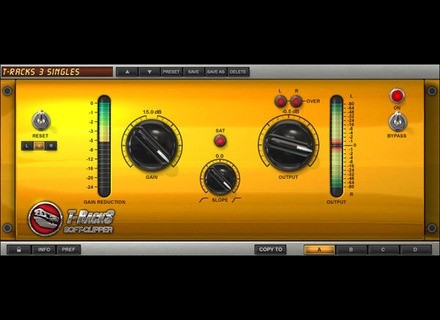 IK Multimedia Classic T-Racks Clipper
4
The IK Multimedia Classic T-Racks Clipper is a plug-in that comes with the T-Racks 3 Mastering Suite software, but can be purchased as an individual plug-in if you don’t want the full T-Racks software. It comes as RTAS, VST, and AU plug-in formats, so pretty much everyone should be able to use this if they’d like to. I’ve really only used this plug-in in T-Racks 3, although I do have it ready to go in my Pro Tools suite as well. As far as installing the plug-in goes, I can really only speak to installing T-Racks 3 as a whole, which was easy enough. The plug-in also has a simple interface, consisting of only a few parameters. These parameters include those for gain, slope (ratio), and output. The plug-in also has stereo metering for both gain reduction and output level, as well as a bypass switch. It’s easy to tell that this is an easy plug-in to get acquainted with, so I don’t think users will need a manual.

I’m currently running this plug-in on a Mac Book Pro that has a 2.2 Ghz Intel Core 2 Duo processor and 4 GB of RAM. I haven’t really had any need to run this as an RTAS plug-in in Pro Tools LE 8 that I run as my main DAW, but I have used it a good amount within T-Racks 3 for mastering purposes. I don’t know how well it will run as a plug-in in Pro Tools LE, but most of these T-Racks plug-ins do end up taking up a good amount of your processing power. As far as running it in T-Racks 3 is concerned, it really depends on your system as each is different.

I can’t say that I’d recommend purchasing the IK Multimedia Classic T-Racks Clipper plug-in as an individual plug-in, but this doesn’t mean that it isn’t a worthwhile plug-in to use. I just think that if you’re interested in this plug-in that you should purchase the full T-Racks 3 Mastering Suite, as the price per plug-in makes it well worth it to buy the full software. Plus, if you’re going to buy one of these T-Racks 3 plug-ins individually, I’d recommend going with one of the other ones any way. This is definitely more useful in a mastering setting rather than a mixing one, which is the reason I’ve only used it for this application…