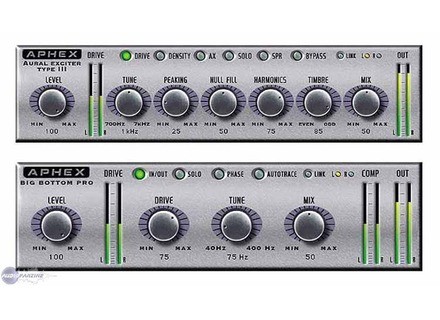 Aphex Bundle Tdm
4
The Aphex Systems Aphex Bundle TDM is a set of two plug-ins - the Aural Exciter III and Big Bottom Pro. Each do a similar thing, but to a separate group of frequencies. I didn't have anything to do with the process of installation of the bundle, as it had already been installed on the computer that I used on. However, there were no compatibility or other problems that I know about between these plug-ins and the system that I used it on, which was Pro Tools HD based. The interface of each of the plug-ins are similar, both being very simple to understand and follow. A manual is not necessary to learn how to use or install this plug-in bundle, but if you are having some sort of technical I'd recommend consulting it.

Both of the plug-ins in the Aphex Systems Aphex Bundle TDM take up a very small amount of processing power. Of course there is a native version of this bundle, but naturally the TDM bundle will only run on an HD system. Having said this, I really don't think that anyone will have a problem running these plug-ins, regardless of the type of system that you're running them on since they simply do not take up very much processing power in any system setting.

Each of the two plug-ins in the Aphex Systems Aphex Bundle TDM are based on hardware versions, which in my opinion will always be better than plug-ins, but since these are the most essential signal processors to have, getting this plug-in bundle rather than the hardware makes a lot of sense both in terms of price and convenience. If you are looking for a set of plug-ins that will do as advertised and either boost up your treble or bass, respectively in each of the plug-ins, the Aphex Systems Aphex Bundle is absolutely I'd recommend checking out. Again, not the most essential set up plug-ins, but you never know when your sound might need that extra kick...