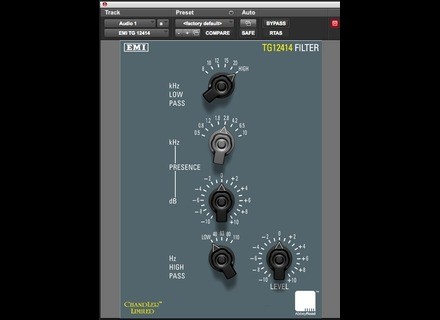 Abbey Road Plug-ins TG 12414 Mastering Filter
5
The Abbey Road Plug-ins TG 12414 Mastering Filter is a plug-in that is found in the Abbey Road Plug-ins Mastering Pack bundle. It's a stripped down version of the TG 12412 equalizer plug-in that is also included in the same bundle. I didn't encounter any problems while installing this plug-in, as I had installed the proper formats and all. It should be simple and easy as long as you follow the instructions. As far as the user friendliness goes, I'd say it's a real easy plug-in to figure out how to use if you have some experience using equalizers. This one has high and low pass bands, as well as a middle 'presence' band, which has a pretty wide selection of frequencies to choose from. So essentially, this is a one band, semi-parametric EQ with high and low pass filters. The low pass has six frequencies to choose from, while the high pass has five. The middle band has eight frequencies to choose from, and a gain knob. There is also an overall output leveler. I didn't need a manual to figure out how to use this, and I really don't think that many users will.

The system that I'm using the Abbey Road Plug-ins TG 12414 Mastering Filter (and the full Mastering Pack bundle) with is a Pro Tools LE based system. I'm running everything on a Mac Book Pro computer, made up of a 2.2 Ghz Intel Core 2 Duo processor, and 4 GB of RAM. I run Pro Tools with a Digi 002R audio interface and I monitor with a set of ADAM A7's. This has definitely been enough to support running this plug-in, and I've used it both for mixing and mastering. It's doesn't seem like the type of mastering plug-in that takes up too much of your system, or at least it hasn't on mine.

The Abbey Road Plug-ins TG 12414 Mastering Filter is a great overall equalizer plug-in for both mixing and mastering. While it's dubbed a mastering plug-in, and it certainly is, I've also found it to be great for mixing as well. It's not the most flexible plug-in, but for a one band essentially, there's definitely a lot that you can do with it. I think it has a great overall sound, as it's easy to add some grit or some brilliance with just using the single band. It's also nice that you can easily drop low or high frequencies off that you don't want or that are unnecessary. The Mastering Pack is just made up of this and the other aforementioned TG 12412. It's definitely best suited as a mastering plug-in and bundle, but it's more than nice that it's versatile. Abbey Road makes some great plug-ins that sound quite realistic - the TG 12414 and the Mastering Pack as a whole is absolutely worth checking out if you're in the market for something like this.
Did you find this review helpful?yesno
»