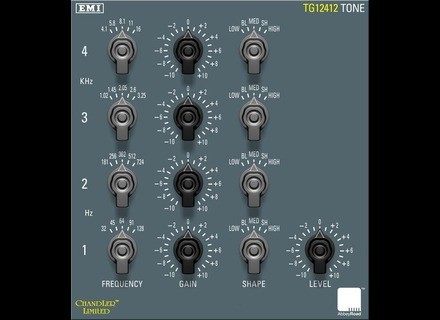 Abbey Road Plug-ins TG12412 Mastering Filter
5
The Abbey Road Plug-ins TG12412 Mastering Filter is a plug-in found in the Abbey Road Plug-ins Mastering Pack, which includes this plug-in and the TG12414 filter, which is essentially just a single band version of this one. As far as installing this plug-in and getting it up and running goes, it was quick and easy, without any issues at all. I can say the same thing about the interface, as it's really not hard to figure out how to use this. This is basically a four band, semi-parametric equalizer that is designed after console EQ's. I don't know if it's designed after a particular console or not, however. Each of the four bands has parameters for frequency, with five different frequencies to choose from on each, gain, and for shape (aka bandwidth or Q), also with five different settings to choose from. It also has an overall output leveler. I haven't seen the manual for this plug-in, so I can't say anything about it.

The system that I've been running the Abbey Road Plug-ins TG12412 Mastering Filter on is my home rig, consisting of a Mac Book Pro lap top and Pro Tools LE 8. I run Pro Tools with a Digi 002R audio interface and the computer has 4 GB of RAM and a 2.2 Ghz Intel Core 2 Duo processor. While this is dubbed a mastering plug-in, I've also used it for mixing and haven't had any issues running a few instances at a time of this plug-in within a single session. If you're using it just as a mastering plug-in, you'll of course need less processing power to use this.

While the Abbey Road Plug-ins TG12412 Mastering Filter comes in the Mastering Pack, I've found it to be more versatile than just being a mastering filter, as it definitely works well for mixing as well. It's got a good amount of warmth to it for a plug-in and is certainly flexible in what it is able to achieve. Often I'll use the other plug-in the pack, the TG12414 when I'm looking to do a simple job, but the TG12412 comes out when I'm looking to do some serious work, or for mastering of course. This plug-in pack and the TG12412 is absolutely worth knowing about if you're looking for an EQ for mixing or mastering...
Did you find this review helpful?yesno
»