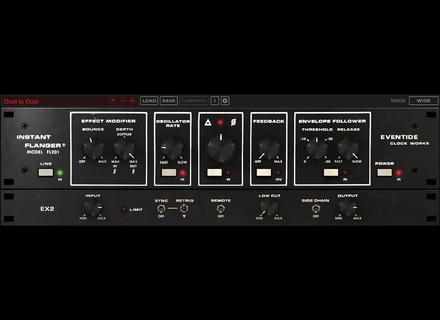 MGR/Brian Johnston's review"Classic and Beyond, Flanging technology used by Bowie"

Eventide Instant Flanger MkII Plug-in
5
A plug-in based on the 1975 Instant Flanger rackmount, what you’re getting are both classic and unique flanging sounds not found on more modern counterparts. The tones and presets certainly don’t sound like your typical flanger pedal, that’s for certain. What makes a Flanger so useful is that it helps to thicken and widen the stereo field for drums, bass, synth, vocals and guitar. This plug-in certainly has presets for all those instruments, whereas I chose to demonstrate how the Instant Flanger Mk II sounds with a guitar and with several different presets. And with any of the presets you can select one of three different outputs: shallow, deep and wide. Moreover, when manipulating this with the Low Cut control you can add various harmonics behind a sound.

As with any good Flanger you can control the Depth (mix) and Feedback of the flange, but there are several other nice features with this plug-in. First, the bouncing effect of this plug-in accurately mimics how a tape machine reacts to manual manipulation of the flange (pressing and letting go). Second, you can control manually the Comb effect, besides defining the Oscillation rate. Third, the Envelope Follower drives the flanging based on the signal’s amplitude. Fourth, you can control the intensity of the flange by cutting (or adding) low frequencies. And fifth, the Remote function maps the flanging control to a mod wheel so that you can make adjustment on the fly. If you play and record into/from a DAW, this plug-in certainly will challenge any flange pedal on the market and should be considered.