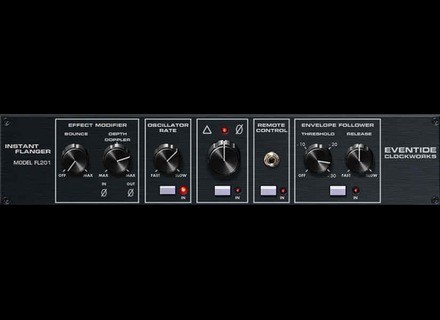 Eventide Instant Flanger Plug-in
4
The Eventide Instant Flanger Plug-in is one of the plug-ins that's included in the Anthology II bundle. I don't believe you can purchase it outside of this bundle, but I'm not 100% sure on this. I wasn't at all involved with installing the plug-in since I don't own it myself. The studio I work at has the full bundle on all of our systems, and the interface and plug-in as a whole is modeled after the hardware version of the same name. It gives you parameters for waveform, oscillator rate, the 'bounce' of the effect, depth, and threshold and release for an envelope follower. It's all pretty easy to follow and if you don't understand what one of the parameters does, simply mess with it to hear how it affects your signal. There are few parameters here, so I'd think most users would be able to figure out how to use it without help from a manual.

I've ran the Eventide Instant Flanger Plug-in on a few different systems here at the studio I work at. Mostly I've used it in two of our rooms, but both are Pro Tools HD based and have quite powerful Apple computers to run it on. Being that it's Pro Tools HD, rarely do we have any issues at all and certainly not related to plug-ins. I don't know how well this might run on an LE system, but if you're currently able to run plug-ins comfortably on your system, I wouldn't think that this one would put you over the edge.

The Eventide Instant Flanger Plug-in is only one of many plug-ins in the Anthology II bundle, but is up there with the coolest in the bundle. I haven't used the original Instant Flanger, but I'd imagine that it's just a warmer sounding version of this. I love the make up of the controls as it's a unique take while still giving you all the tools you need to get a wide collection of different flanging sounds. The Instant Flanger is awesome on vocals, but it's definitely not limited just to this use as it's great across the board. I do like it especially for getting that artificial doubling sound on vocals, however. No matter how you use it, it definitely makes the Anthology II bundle worth looking out for.
Did you find this review helpful?yesno
»