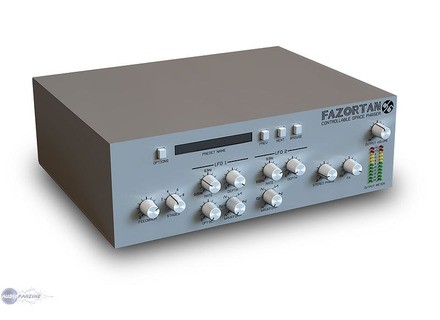 D16 Group Fazortan
5
There were no compatibility issues whatsoever.  I have not referenced the manual as this is a very simple device.  If you are familiar with a high end phaser pedal, rack or plugin, then there is nothing really new here.  Yes, the general configuration and setup is very simple.  There are two LFO's to mess with.  Each has a "Waveform" selection.  One comes with an offset feature that lets you sort of delay on of the LFO's for some interesting sounds.  Other than that, you have a "Stage" selection (2-8), a "Stereophase" knob, "feedback" and a Wet/Dry mix.  It are not familiar with a phaser with these options, no worries.  After using it for a few minutes, you will get a good grasp of the basic functions of each parameter.  All of the editable features are right on the front of the plugin so they are all very easily accessible.

I use this plugin in Logic 9 and Ableton 8 on my Macbook.  It works great and sounds even better.  As with all D16 plugins, this thing works great.  No crashes and no custom presets have ever been lost.  Every time I pull a track up with this on it, its always the way I left it.  I give this plugin a 10 out of 10.  Enough options and parameters for a Phaser and its not hard to use as well as the presets are very helpful in getting you used to the overall function.  I have been using this plugin for around 5 months.

What I like about this plugin is the realistic "warm" phaser effects you get out of it.  You can get some very subtle phase for a "Rhodes" track or a little movement to spice up some drums, or you can get some out of this world, "spin your brain" sounds for some crazy rhythm guitar tracks or even some bizarre vocal effects.  Its very versatile and again, like all D16 plugins, sounds very realistic.  Nothing I don't like about this plugin.  I paid around $50 for this plugin.  I am very happy with that price.  You can't even buy a low budget BOSS Phaser for that and this plugin kicks the BOSS's butt.  Precision and quality is what I expect from D16, excellent.  I have used a couple of different Phaser's including built in plugins in both Logic 9 and Ableton 8 as well as hardware phasers such as Moog, Pigtronix and Boss.  No plugin will ever beat a Moogerfooger pedal, as well as pigtronix, they also are very high quality.  BOSS pedals generally suck in my opinion with a few exceptions (delay, tuner).  Yes, I would definitely buy this plugin again.  Its by far the best computer based phaser I have come acrossed.

D16 Group Fazortan
4
I do not recall having had a problem with the installation and authorization plug-in.
Fazortan is a phaser which has the distinction of being modulated by two LFOs. Adjustable rate of 0.01 Hz (live drone music!) 20Hz. There is a choice between six waveforms. You can choose the number of poles (or stages): From 2-8. For each curve the LFO amplitude of its action (Depth). For all, it was still an adjustment of feedback, a "Stereo Phase", which gives an interesting stereo effect, an "Offset" ("shift of the wave on the amplitude axis" - not very clear for me, even if the action on the sound is audible), a knob "Dry / Wet" and output volume. Of course the effect can be free or tempo sync. Finally, all parameters can be controlled via MIDI (midi learn.) Was entitled to a 18-page manual (in French, please) and 50 factory presets that give a good overview of the possibilities of this plug -in.

Never had any problems with stability and overall operating on Mac Pro (MacOS 10.6.8) with Digital Performer. CPU usage is low but not completely insignificant. We see the gauge move ..

I acquired this plug-in there more than three and a half years. This is a phaser very good, but here it is: Shortly after I bought "Phase Mistress" Sound Toys. And it must be said that it surpasses Fazortan both by the extent of its possibilities by the magnitude of sound. However, it must be nuanced: Phase Mistress costs four to five times more expensive than Fazortan, which we can say without a doubt that it is an excellent value for money. Both LFO and six waveforms still offer a nice selection of effects. Small criticism, however: that the idea of ​​the two LFO is fully exploited, it would be desirable to introduce and determine a phase shift between them. Such a parameter would be the effect swing at leisure. Too bad there is no D16 thought. But hey, Fazortan is still worth every euro of its price (currently 39 euros) and phasing delight lovers who do not want to ruin. Incidentally, I like the look style "HiFi 80" which have the right plug-ins D16. It is pretty clear and practical.

Published on 07/17/08
"You can think about Fazortan as of the exact copy of a retro phaser taken out from 70's and redone to become a virtual unit. But being the same sounding unit that provides primal functionality …