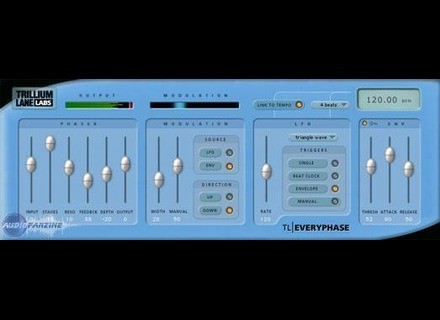 Trillium Lane Labs TL EveryPhase
5
The installation process of the Trillium Lane Labs TL Everyphase was quick and simple as it only took a matter of minutes.  The interface of the software will take a little more time to get used to since there are a lot different parameters to work with here.  It has sections for phaser, modulation, LFO, and envelope and each has a series of parameters under these headings.  If you have experience working with synths and other phasers you will definitely have the upper hand on this software as it has similar types of parameters.  I haven't seen the manual for this plug-in so I can't say how helpful it would be or not as it is pretty self explanatory.

I do not believe that users will have any problems running Trillium Lane Labs TL Everyphase.  It isn't a plug-in that takes up much processing power and even though I haven't really ever used more than one of these within a single session, I don't think that you would have problems doing so if you wanted to.  I run the plug-in on a Mac Book Pro that has a 2.2 Ghz Intel Core 2 Duo processor and 4 GB of RAM and run the plug-in in Pro Tools LE 7.4 that runs off of a Digi 00R audio interface.  As long as you have a decent system like I do, I don't think that you will have any issues in terms of performance with Trillium Lane Labs TL Everyphase.

I've been using the Trillium Lane Labs TL Everyphase plug-in for about six months and in my opinion it is overall a very good phaser plug-in.  It doesn't have all of the same parameters that you would see on a traditional guitar phaser pedal, but goes deeper into the make up of the sound.  You can get all sorts of phaser and modulation type tones as having all of these parameters makes it capable of getting a wide array of different effects.  If you are a home or professional studio owner looking for a great sounding phaser plug-in, you should definitely consider Trillium Lane Labs TL Everyphase.
Did you find this review helpful?yesno
»